Live Photoshop 3D inside After Effects in CS5.5 and earlier 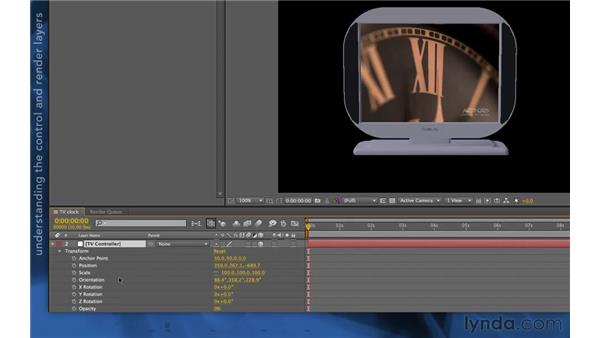 Join Chris Meyer for an in-depth discussion in this video Live Photoshop 3D inside After Effects in CS5.5 and earlier, part of After Effects Apprentice: 11 3D Space.

I've returned to After Effects.…I'm going to play around with some of these 3D objects I've been creating in Photoshop.…First, I'm going to clear my display by doing Close All and I'm going to clean…up by selecting this building that I imported in earlier movies and put it down…in the My Comps folder.…And indeed select My Comps, because you're going to be importing some…brand-new material into it.…I'm going to type Command+I on Mac, Ctrl +I on Windows to get the Import dialog.…I'm going to go up to the 3D folder, where I've been saving all my files so far.…And if you followed along with the 3D model steps a couple of movies ago, select…the model you saved from Photoshop.…

If you do not have access to Photoshop or do not perform those steps, instead,…you can select TV clock.psd.…I'll click Open, and in the next dialog that appears, change Import Kind to…Composition - Retain layer Sizes.…This will create an After Effects composition for me, return the layers to the required size.…This was called Crop layers in earlier versions of After Effects.…

Video: Live Photoshop 3D inside After Effects in CS5.5 and earlier