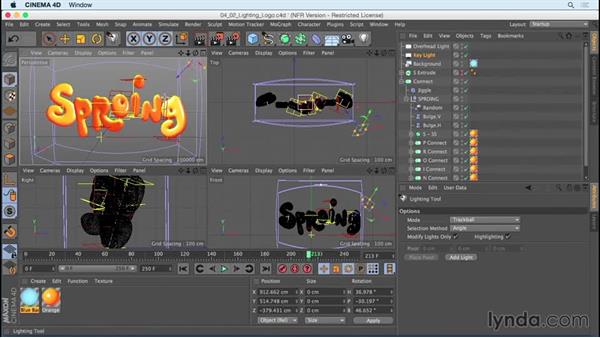 Join EJ Hassenfratz for an in-depth discussion in this video Lighting the logo, part of Mograph Techniques: Creating a Bouncy Cartoon Logo in Cinema 4D.

- With our scene textured…we can now light it to create…some nice highlights and shading…using a 4 point lighting setups.…So let's first add an overhead area light.…We're going out to light…and choosing area light…and we will position this…right above our text and we're gonna rotate it…so it's facing down.…You can see it's facing down…by this blue handle here.…So you can see it's pointing down.…We'll just place that right above our text.…

Let's rename this light overhead light,…there we go.…And we're gonna give this…a slightly peach hue…and bring the intensity up to about 150.…Let's hit render and see what that…looks like so far.…Next let's go ahead and create a key light…that will be positioned…slightly to the right of our object…and have it have a slightly blue hue.…Let's go ahead and let's just…duplicate this overhead light…and I'll just rename this he light…and I'm gonna position this…and try to aim it right at our…text here so this is kind of gonna be…the light that's gonna really create…that specular highlight,…so what we want to do is just bring the intensity…