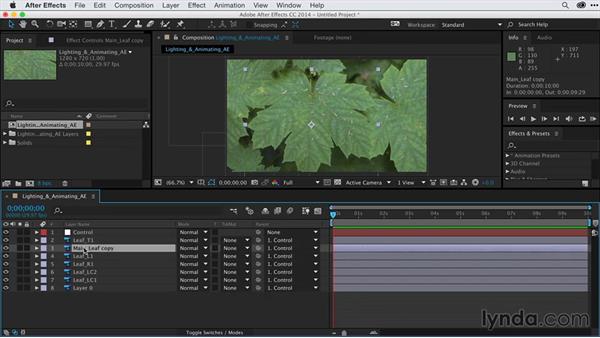 Join Ian Robinson for an in-depth discussion in this video Lighting and animating still images, part of After Effects Guru: Advanced Photoshop Techniques.

- In this video, we're going to take a relatively flat layered Photoshop document and extrude it into 3D space and create a dynamic animation using lights and cameras. In our Photoshop document, you see I've successfully lined up a bunch of duplicates of this leaf layer, or leaf element. They're all positioned around the scene. But if you notice, our background layer is still the same background that we used to inspire this initial layout of all these leaves.

The problem with this, if I select my main leaf here, and just move it in the scene, notice now I have another leaf underneath of it. That's not necessarily a good thing. What I'm gonna do is, create a generic background for us to use when we're lighting and starting to animate our scene. I'll just undo that last move here. I'm gonna hold down the command key, and I'll click on this Leaf C1 layer. Notice that loads any of the painted pixels. Now I'll hold down command and shift, or control and shift on Windows, and click through each of the subsequent thumbnails to load up each one of those selections.

Now I can go to this background layer here. I'm almost set to fill with generic elements. But I need to overselect these pixels since, notice how these leaves aren't pixel-perfect over top of the other leaves. Let's go up under Selection, choose Modify, and Expand and let's expand it by at least 50 pixels and click Okay. Now that I have more than leaves selected, we're ready to actually go ahead and fill.

We can go up under Edit, choose Fill, make sure Content-Aware and Color Adaptation is selected. Then when we click Okay, it's gonna take a second. But once it figures out what's going on in the scene, it's gonna go ahead and fill that background layer with other elements that aren't necessarily as iconically visible. Here, if I go ahead and click and drag through the different eyeballs, you'll see here, now it's much more of a generic look. If this sort of repeating copied pattern is bothersome inside of After Effects, we can always blur this layer.

Now we're ready to go ahead and start lighting and animating this. I'm gonna press command d, or control d on Windows, to deselect. Let's go up under File, and let's save a copy. I'll save it in my Footage folder under Stills. Let's just call this Lighting_&_Animating _AE.psd. We don't need the alpha channel, so we can deselect that. Go ahead and click Save.

Choose Okay to maximize compatibility. Now we can just move right into After Effects and double-click on the Project panel. Navigate to that same Footage folder, In your Stills, there's Lighting_&_Animating.AEP. We can import it as a composition, retaining layer sizes. Just go ahead and click Okay to confirm the default options. Now we have a huge comp, 3600 by 2400, 12 seconds at 29.97 frames per second.

That's based on the previous duration of a project that we had set up. If I wanna change this, I can do a couple different things. The first thing, let's just double-click the comp so we can load everything up in our view port. Now, the first thing I wanna do is, go ahead and create a Null. I'll select Layer 1, and then go up under Layer, choose New, Null Object, press Return, and let's call this Control.

Now we can select Layers 2 through 7 and point their pickwick up at the Control layer. Then, Layer 0 is going to be our background, or our back plate, layer. Now, before we animate, let's go ahead and animate based on a specific video pixel resolution. I'm gonna go up under Composition, Comp Settings, and look under my Presets. Let's go down and choose HDV/HDTV 720 29.97.

We can change the duration to 10 seconds and click Okay. Now, with my Control layer, I wanna go ahead and scale everything down. Since my background is sort of set in relation to everything else, I will just make the background a child of Layer 1, as well, just for this specific instance. Now I'll press s to open up Scale, and I'll scale this down. Okay. Now we have a rough recreation of our scene.

In order to get the depth that we're looking for, we need to offset things in z. Here, let's select our main leaf and I'll press p to open its Position Data. Notice it's only got x, y. I need to toggle my switches and modes and enable 3D for all of my layers. Just click and drag down through all of your layers in the 3D options. Now in here, we'll select Layer 3 and just bring that forward by dragging to the left.

We'll bring it up maybe 100. Leaf T1, which is this one up here ... If you're ever confused, you can just toggle the visibility on and off. Let's press p to open its Position. And we'll have that be a little closer to our camera, just so I can see what we're doing. I'll bring that up here a little bit more, and here, I'll bring it down into the scene. L1, yep, we'll move this back. Let's go to P here and we'll position this back in the scene.

Maybe not quite so far. There we go. Perfect. When you're finished positioning everything, press command a to select everything. Then you can press a, not once but twice. That'll open up your anchor point and then just collapse everything. Let's add a light into the scene. I'm gonna go up under Layer, choose New, Light. I'll make it a point light, set the intensity to about 85. We can leave it set to white for now.

For the Falloff, let's do a Smooth Falloff, leave the Radius set at about 100, and the Falloff Distance at 500. Then we can have Cast Shadows enabled, with Shadow Darkness at 75 and Diffusion at 20. Now all I have to do is press p to open up the Position of that light. I can move it back in the scene or closer to the scene. Notice this is giving me a pretty small area of light. Let's double-click on the light here one more time.

Let's increase the Radius. I don't wanna increase it too much. Let's increase it to around 481. Now when I click okay, this is giving me a nice, soft falloff that we had, kind of similar to what was originally in the starting still. I'll call this Light_Over. Let's press command d to duplicate this light, and press p to position it. Let's move this one down behind our first leaf.

Let's change the Falloff to None. That way, as we drag the intensity slider up, we don't necessarily have to worry about adjusting the radius of the falloff, as well. When I click Okay, we're starting to look pretty good. Now, in order to create that actual sense of depth, we need to add a camera. I'm gonna go under Layer, choose New, Camera, and we'll choose a One Node Camera. I find that that tends to make things rather easy when you're moving around in z space.

With Camera One selected, since it's at the top of the layer hierarchy, if I press p, I can open its Position and, as I move through the scene, you can see I've got that z depth. If I move along the x or the y, I can get a little parallax, but if I press r to open the rotation, now, if I go ahead and angle my camera a little bit ... Here, I'll just angle it on the x, angle it on the y, and then reposition myself.

You can see I'm starting to get a little bit of parallax as I move across the different leaves in the scene. Now, we have a basic light set up for our scene. We have a basic camera set up. We're ready to actually start keyframing animation and polishing for our final output.

1/28/2015
Integrate Photoshop into your everyday video and animation workflows to save time, correct common video issues, and generate custom textures. After Effects guru Ian Robinson starts with the essentials: retouching, correcting color, and fixing distortion with Photoshop. Then he takes things further and shows how to prep still images in Photoshop for animation in After Effects. Next, learn how to use Photoshop to create environment maps that accurately reflect graphics when applied in After Effects or CINEMA 4D (C4D) Lite. In the last chapter you'll explore integrating Photoshop into a 3D production pipeline, making custom textures in Photoshop, and applying them via bump maps and normal maps in C4D Lite.
Topics include: