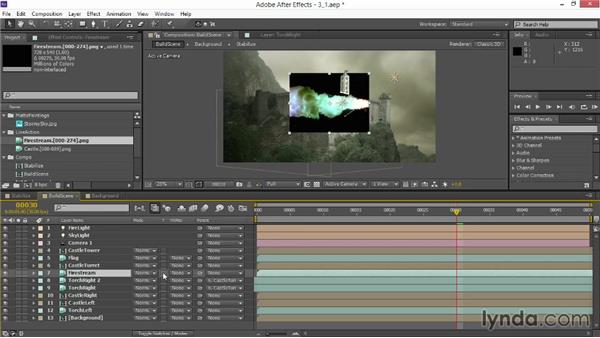 We've rebuilt the castle in 3D, we've also lit it and added some CG set dressing. We can now move on to the fun part which is the destruction. Before I do that I want to organize my timeline. It's getting a bit crowded with all these layers, what you can do though is pre-compose some of the layers to simplify it. Pre-composition means that the selected layers get placed into a new composition and that in turn is nested into your current comp. Now it gets a little tricky with 3D layers, but there's several ways you can deal with that. I'll show you a very simple quick and dirty way to deal with it and then we'll work on a more advanced way later on.

So I'm going to Shift-select my fog layer, trees, mountain, and stormy sky, then go to Layer > Pre-compose. Can enter a new name for the composition here. For example, Background. And click OK. Those layers are replaced by the nested comp. Now that composition is over here I can open it. And there are those layers. Now it's not working yet. Because it's a 3D set of layers, they're not lining up in the right place when I nest it.

What I can do though, as a quick solution, is copy the camera and the light, Ctrl or Cmd+C, and paste those into the background, Ctrl or Cmd+V. Then drag the camera down so it's all in the same order it was previously. In any case, though, everything's correct now. I go back to build scene, everything's correct. So now we can move on and bring in some new footage. I'm going to start with a fireball that the dragon we can't see, that's off screen, is firing at the castle.

This is a video, so I'm going to go to LiveAction, select that, and then File > Import File. In the Footage folder there's a Firestream folder. Once again, in the image sequence, I'll select the first frame and Open. want to drag that down and place it over TorchRight. It's like a later frame. There it is. Now, as it turns out, this footage is too slow. It's slow motion. It's not fast enough for a quick attack.

What I can do, though, is time-warp it. There's several ways to time-warp inside After Effects. I'm going to show you Time Stretch. First I'm going to rename this layer. Fire stream. While it's selected, I'll go to Layer > Time > Time Stretch. In the Time Stretch window, I can see the current duration, which is 275. If I want to speed it up, I can enter 50. That makes the sequence half as long, and twice as fast. Now I'll click OK.

Can see it jumps forward to a later frame. Now, to integrate it better with the background, I'm going to change the blending mode. So I'll toggle switches, and change Blending Mode to Screen. Screen will save the bright parts, but throw away the dark parts. Let's change that to a 3D layer now. Then, we can position this and rotate it so it comes down from the upper right. It comes towards this tower, which we're going to destroy. I'll give you some values here and then we'll see where it winds up.

I'm not going to use the rotation separately, so negative 35 in Z. Now it points down, let's see where it wound up. Top view, and here it is, it's behind the right wall but in front of the tower. That's why it has a very slight Y rotation, to fit it in here. Let's go back to camera one now, and take a look. Now, at frame 22, I want the fireball to barely touch the tower, so it's a good indicator of what's going on.

It's a bit bright now. What happens is, since it's a 3D layer, it's being lit by those lights we placed. So what I can do, is go to Material Options and reduce the specular intensity down to 0. And that'll make it closer to its original value. You can also adjust the opacity over time to make it fade out. I'll go back to the transform section. In frame 35, I can key it to add 100% and then at the end of the time line, fade it out to 25%. Now, there is a problem.

At some point, late in the footage, it starts to go across the edge of the frame. We see a hard edge here. So, to solve that, I can draw a big mask over the entire fireball, make it round right here, and then feather it. Let's say a feather of 100. That will soften it. If I need to, I can adjust those masked points to make it even more subtle. Now, we're going to have some other footage here, explosions and so on, so we'll come back to this and adjust it later. Let's play it back. Better.

So there's a nice violent fireball coming in. You're able to use a piece of video effects footage, speed it up through a time stretch, and then position it as a 3D layer to make it look like there's an attack on this castle.