Importing files into After Effects 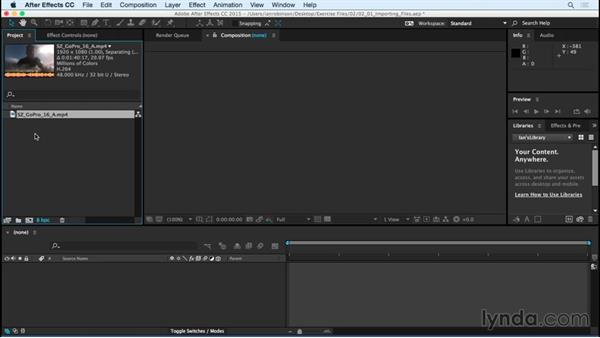 - We're starting this video with a blank project because I wanna drive home one important point and that is the fact that external files are not actually embedded into your After Effects project when you import those files. They're just referenced from their original location. So, let's import a file so you can see what I mean. There are multiple ways of importing files. The first most common way is to go up under File and choose Import, and then as you can see there are a bunch of different options but most of the time you're fine just by choosing File.

So, when I go to File here I'l navigate in my Exercise Files to my Assets folder. Notice how well organized this folder is? Now, let's navigate to the Footage folder and in here I wanna import this GoPro_16 file. Notice when you select the file, down at the bottom it'll tell you what format the file is. On occasion, you won't be able to select the file, and nine times out of 10 that means After Effects doesn't recognize that kind of file format. But if you're almost positive that that can be imported into After Effects you can change this setting from enable Acceptable Files to All Files and that'll usually give you the ability to try and import it.

But I'll leave it set to all acceptable files and we can just go ahead and click Open. When you click Open it actually imports the file into your After Effects project. But again, this file doesn't actually live in your project. It's still living in the folder where we imported from in our Assets folder. That's part of the reason why it's so well organized. Another thing you'll notice, when you import files into your project they don't automatically go into any compositions. They're just ready to go into any compositon.

So, if I want this to be inside of a composition I can go ahead and just click on the file and drag it down to the new comp button and it will automatically make a new comp containing my file. The second way to import files into After Effects is to just go ahead and double click in this blank area of the project panel. That'll automatically open up the Import File dialogue box. So, again, let's go back to our well organized Assets folder and this time I wanna import a Photoshop document. So, I'll go to my 02_PSDs folder.

In here, let's just select the Lower_3rd_Board and under my options notice it sees that it's a Photoshop file and I can import it as a Footage or Compositions. Now, Compositions give me a whole other set of options which we'll cover in the later video. For now, I want you to just go ahead and import this as Footage. Make sure Photoshop Sequence is not selected and then we can go ahead and click Open. Now, we'll get a dialogue box that just gives us one more chance to change the Import Style, whether we want to go to Composition or not.

So, let's leave it set to Footage and choose Merge Layers, and then click OK. So, once again, we have another piece of footage that's been imported into our project. This time it's just a Photoshop document. Notice there's no duration for this file because it's a still image. But if I drag it and drop it right down here to my timeline it'll go ahead and inhabit the entire duration of the timeline. So, when it comes to importing files into After Effects it's important to maintain a well organized file structure such as keeping all of your source files in one main folder because After Effects doesn't actually embed those source files into your project.

It just references or pulls them from their original location.

Video: Importing files into After Effects