Importing assets and compositing passes in After Effects 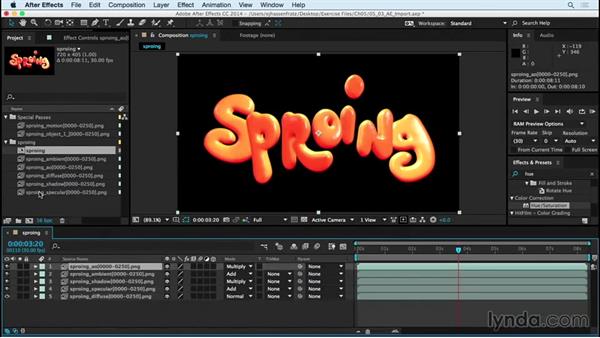 With our scene rendered, it's time to import…our rendered assets into After Effects…by importing the AEC file we created from Cinema 4D.…If one didn't save out when you rendered,…just go to your Cinema 4D project file…and save out this AEC compositing project file.…So, we can now go into After Effects and import that file.…We'll go to Import, File and then find that AEC…file that we created in Cinema 4D…and we'll just open that up and you can see that…that automatically imported all of our passes.…

So, we got our special passes, our motion pass…and our object buffer and then,…we also have a composition.…If I double-click to open it,…we already have our passes composited…with their correct blending modes.…So, that's pretty awesome.…That AEC file does all that work for you.…So, the first thing I wanna do is go into our…bits per channel and change that to 16…since we rendered out at 16 bits per channel…and hit OK.…The next thing I wanna do is go into our…same project settings and go to…SRGB so we actually work in the same…

Video: Importing assets and compositing passes in After Effects