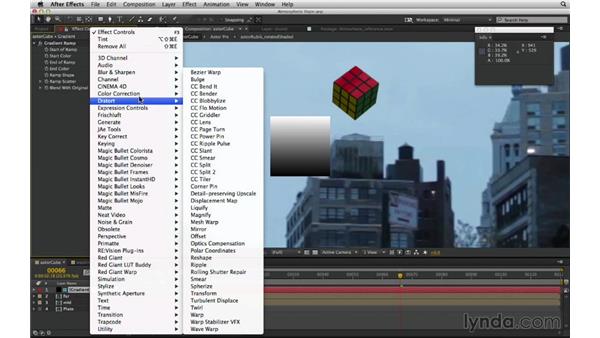 Join Mark Christiansen for an in-depth discussion in this video Go further with atmospheric haze, part of After Effects Compositing: 2 Matching Foreground to Background.

When an element in your scene is set at an extreme distance, assuming the scene takes place on planet Earth, it helps to know what makes the sky blue in order to know what that element should look like. So, here's a scene where I pretty much guarantee that your eye sees this blimp as bigger and further away than this one. If I turn off my color adjustments, however, they're identical. What's going on? There's no reference in this frame to tell me what should be different between the two of them.

So let's look at a reference shot. Here we have a rooftop scene. And just expand this full screen. And I have the info panel open. So, I can move my cursor over the foreground and see that the white values are predominately red and we weakest in blue. And the shadows are pretty flat. Those are areas that I'd perceive would be neutral. Moving all the way past the across the bay portion of the shot and here into the foothills where it's probably eight to ten miles away. This building has white values that are actually predominantly blue, and have the least amount of red.

Likewise, the shadows are predominantly blue, and you can see that with the naked eye. This is the result not of pollution, but of the atmosphere. Which is made up of nitrogen, oxygen, a little bit of argon, and a teeny bit of water, but that counts for a lot. Collectively these cause the shorter wavelengths of light to bounce around and reflect, and they make things blue. That includes things that are at that distance in the atmosphere.

So, let's put this into practice in an actual scene. Here I am creating kind of a surreal scene, I have these floating Rubiks cubes at various distances. Now, as you know from a previous movie, I can use a gradient as a reference and match that and then apply it to this rather colorful cube that's kind of hard to match. So I'm going to make the gradient look like it matches that building right there. I'll start by adding a Levels effect.

And let's switch to the green channel. Adjust RGB. So I can see that I'm going to lower the contrast to start. Now it looks better. Let's move over to red. In red I see that I need more contrast in the blacks at least, and less in the whites. On blue it's just the opposite, I actually need to lower the black contrast, and raise it in the whites. And let's take a look. That appears to match pretty well.

So I can just take that levels adjustment, I could paste it right on here, but before I do that I'll turn it off. And going to de-saturate it as well. In this case, I'll just use good old Hue Saturation because I don't really care that the saturation is also going to lower the contrast. That's actually a good thing in this case. I'm going to bring it way down, negative 80. And then paste in the levels, and that looks pretty good. I'll copy both of those, and use those as a starting point for the furthest.

But to get this one closer to the color of the sky, I'm going to add another effect, basically going to take a shortcut here. And add a tint. And for this, let me get a black level, somewhere off the side of this building. Like maybe this tower here. And then some bit of sky. I might even lighten that a bit. I can dial it into taste, but that looks pretty good. I could lighten the blue, the black blue.

And there. Okay, now it's really starting to disappear into the sky. So the point is that, color level adjustments, alone, can absolutely affect how far an object appears from camera. Keep in mind that if the shot is set right here on planet Earth, we're more likely to believe it if far distant objects are less saturated, and quite a bit bluer. 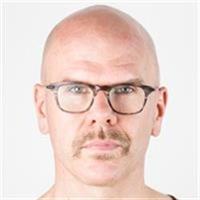 5/22/2014
Creating a moving shot that is made up of disparate elements and looks as though it was taken all at once, with a single camera, is the very core of visual effects compositing. To make the effect look natural, compositors also need a deep understanding of how to match color, light, and phenomena specific to the camera, including grain and depth of field. Matching requires no special knack; for example, you can learn to effectively match color even if you have trouble seeing color accurately. So join Mark Christiansen, as he teaches you how to composite 2D or 3D foreground objects to a background scene with After Effects and seamlessly match light, color, depth of field, and noise, so that every element looks natural.

This course was created by Mark Christiansen. We're honored to host this training in our library.
Topics include: