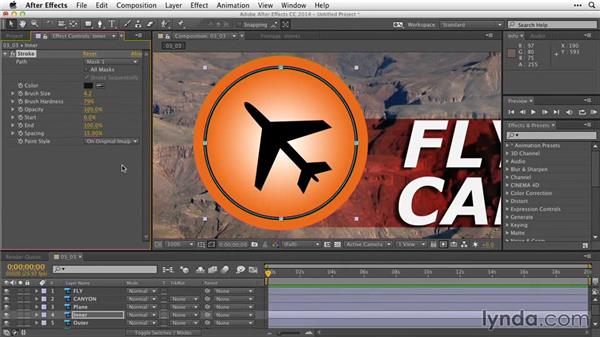 Join Ian Robinson for an in-depth discussion in this video Generating graphics from shapes, part of After Effects Guru: Working with Photoshop Files.

…Once you have a graphic created as a shape layer in Photoshop,…you can import that into After Effects.…That's pretty straight forward.…But, one of the things that's not straightforward is what you…can do after you import that into After Effects.…There are a number of different ways you can actually create animation.…You can actually animate the mask.…You can generate new graphics.…And you can repeat that graphic over and over again, with some other effects.…So that's what we're going to explore in this video.…

So let's get started.…So let's start in Photoshop.…Notice when we're in Photoshop, we have our composition, and…it has a background layer, a graphic that isn't vector-based,.…Three vector based graphics, shapes, and…then some vector--based text, which is just plain editable text.…So now, it's ready to import into after effects.…Navigate over into after effects,…then double click in your project panel to open up the import dialogue box.…Once in there, navigate in your exercise files to the 0303 file.…