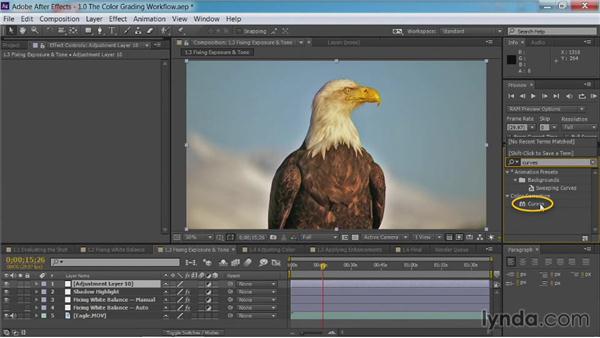 As I jump forward here, you'll see that the tone of the image is still a little bit crushed. The overall white balance is looking pretty strong, but I'd like to bring out some of the details in the shadowy areas, achieving proper balance between the mid tones, shadows, and the highlights. Let's add another Adjustment layer. And in this case, I'll take advantage of the shadow highlight adjustment, which is a really easy way to bring out the details. You'll note that there are auto amounts on that, but typically I'll dial this in manually, recovering some of the highlights and lifting the shadows as I see fit.

That's a great way to balance things out. Let's rename that, and make another Adjustment layer here for curves adjustment. Curves is a great way to adjust the overall tonality of the image as it gives you several control points. You'll note, for example, that I can lift up the shadowy regions. While further recovering the highlights a bit. In fact you can turn this into multiple control points, and it makes it a bit easier for you to go after, particularly problematic areas.

Here we go, let's pull those blacks down just a little. It's looking pretty good. Now, you'll note as I toggle those different states off, that we've really lifted up some of the areas that were being lost with the bird itself however, with any adjustment to tone, we typically have a modification to the color channels. Lightening the image will tend to desaturate the image overall, and darkening it will boost the intensity of color. This is something you'll need to adjust and compensate for.