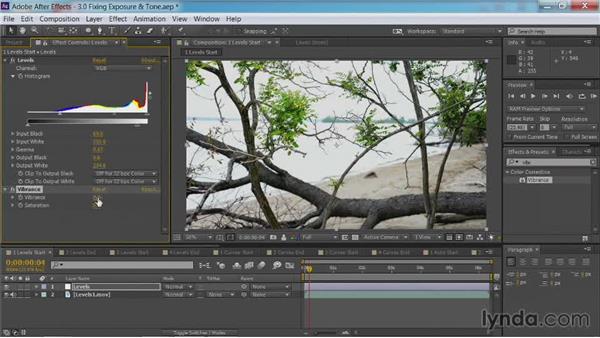 One of the most useful adjustments you'll have at your disposal is a levels adjustment. Essentially, with three control points, you can manipulate the shadows, the highlights, and the midtones. And this makes it easy to balance out the image as well as add contrast. In this particular example, you'll see that this shot is a bit washed-out. And I'd like to restore some contrast. Ideally we're going to take it to something that looks a bit more like this. By adding an Adjustment layer. Let's name that Levels, I can apply a levels adjustment.

Let's use the base levels adjustment, which is a 32-bit channel effect. Notice here that the low end lacks contrast, that there's no rise in histogram until really far in. By pulling that black input slider to the right, we've restored some contrast on the shot. Additionally, moving the middle slider to the right, pushes the mid tones down a bit. Using the Output sliders, I can clip the whites so they're not so bright.

In this case, it needs just a little bit of vibrance to round the shot out. This was shot on a DSLR, which tends to lose some of the color information in the shot. That's looking a lot better. With a quick toggle there, you can see that the levels and vibrance adjustment worked together to restore things. Let's take a look at another shot here. And this one was more correctly shot. There are no real issues, but I would like to get better contrast in the scene. Let's add a new Adjustment layer. And bring this in. Looking at the histogram, I put the black input slider.

Where it begins to rise, and the white input slider where it begins to rise. It then becomes a simple matter of moving the middle slider to balance the teeter totter. That looks pretty good. I can now lower the white point and lift the black point so things aren't so muddy. And then, since I did brighten the image, it's a good idea to put a little bit of saturation back in, or vibrance back in, to restore the color. As you brighten a shot, color detail will become washed out.

So, you see there, the before and after. While subtle, it's definitely an improvement, and oftentimes that's all it takes, is a little push or a little lift with the boost of the color.