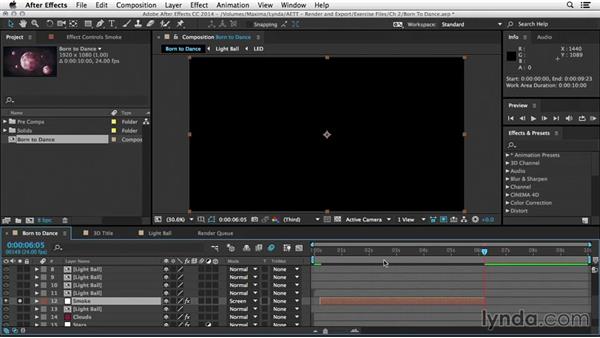 - If you want to check what you did inside After Effects, you need to calculate a temporary cache file which rely on the electronic memory in your computer, which also known as RAM, random access memory. Now, After Effects is known for its hunger for high amount of RAM as well as disk speed in order to perform better, faster, and longer. However, sometimes you need to work with what you have or in other scenarios when you've got a heavy project and you still want to preview it in a reasonable amount of time, you need to rely on the hardware on hand.

So here are some things worth to know in order to make your RAM previews faster and longer. So in order to demonstrate, I've opened up the Born To Dance project from chapter two. If you don't have access to these exercise files, just open up some heavy project that is taking you a lot of time to render and try to follow with me. So this is a full AGD project with a lot of layers and some 3D titles as well. And when I'm trying to RAM preview it by pressing zero on my Num Lock key, you can see that just for one frame we do need to wait for After Effects in order to finish all its calculations.

So this a no-go for me. This is taking too long. The first and most obvious thing to do is actually change the resolution from Full to Auto. And this will actually match the resolution to the size of the viewer. In this case I'm using Fit Up to 100%, so it's actually scaled down to a little bit more than 30%. And this means that a third of the pixel is good enough for me in order to get impressed for what I have over here.

This means that every pixel is going to be divided by three which actually going to give us nine times faster RAM preview. So now when I'm pressing on the zero in order to create RAM preview, you can see that everything is working much faster. And we can actually sit here and wait for it. But this is not true in my case. So this is, even with this auto resolution, too slow for me. I'm going to wait for a couple of more seconds maybe until 2 1/2 seconds, just so we can get a sense of the first couple of seconds, the beginning of this animation.

And then I'm going to press zero once again in order to see what we've been managed to render so far. Now in this case since I see that I've got a couple of duplicates over here, I may want to go to the timeline and actually switch them off or better, I can actually turn the solo switch on to the layers that I want to preview. So for example, let's preview the Burst Particles over here as well as the 3D Title and maybe couple of the Light Balls.

We need to identify which one is the main one, which is in this case the layer number 11. I don't want to bother myself with the smoke right now. But I will enable a couple of other layers just in order for After Effects to be a little bit more speedy. Now, there is also an adjustment layer here with the Camera Lens Blur effect. And this is a very slow effect to render. So I'm going to make sure that I'm not going to preview it in this stage. Now let's return and press once again zero.

And you can see that we have much faster response. And also for the previews frame that we've already been cached, After Effect is smart enough to use this cache and just remove the unnecessary items in order for previewing the whole thing. So this is a great way to work, just make sure to solo the elements that you are working currently in order to make the previews go much faster. There is another alternative. You can also set a beginning and end to the work area over here.

This means that once you set it and press zero, After Effects will only treat the area underneath those markers. So all the frames that are going to be calculated are everything that we'll see over here. If you want to define it using a layer, let's say that here in this example I have this smoke layer which I've already selected, and I want to use it in order to define a working area, let's also solo it so we can see what it has. You can use one of the following keyboard shortcuts.

Either use the IBON shortcut which means press I, B, O, N in sequence. I will be the in, B for the beginning of the work area, O for the out of the layer, and then N for the end of the work area. Or you can use another alternative. I'm just going to double-click in order to reset my working area. And I'm going to press command option or control option if you're working on the PC, and the letter B. And this will set just this layer as the work area so After Effects will know that if I solo it, I want only to render the boundaries of this layer.

Okay, let's say that this is good. You already knew some of those. It doesn't really help you because you really want to actually control and see everything. If this is the case, then take a look at the preview panel. Let's expand it a little bit so we can get the sense of everything that it hides. And by that I mean that you can set different frame rates. You can also skip frames or you can change the resolution when you are creating RAM previews.

I will highly recommend not to touch those settings, but instead go and switch to the Shift RAM Preview Options. And this is another set of preview commands which you can use and then you can define different things in order for After Effects to preview, let's say, in a draft mode. So I'm going to say that under Shift+RAM I'm going to always skip, let's say, one frame or maybe two frames, depending on what you want to achieve.

So let's start with one frame. And I'm also going to set the resolution to Quarter. So every time that I'm going to press shift and then click on this button or shift zero if you want to initiate it from the keyboard, then what actually will happen is that After Effect is going to use these settings that I just defined over here in order to generate a quicker, much quicker preview. So you can get a sense of how this works. It's basically reducing the resolution and skipping one frame each time in order to generate what is going to be a much faster preview.

And it will allow us to see the whole composition, in this case 10 seconds long, much quicker than what we've managed to do before. So if you take a look at the result, you can see that it is a little bit jittering, but you can get a sense of what the project consists of. So you can decide whether you want to continue and work on it or maybe the animation needs some more tweaking. So do consider to use those Shift RAM Preview options next time you need to RAM preview.

Also note that you can use the RAM preview from the current time. And if I'm going to tick this and also the full screen, it means that every time that I'm going to Shift RAM Preview because these are still the settings for the RAM Shift Preview, it will use the current time indicator as a starting point. Let's give it a test by pressing shift zero. And we can see that it did. It's working. And of course, the result is a little bit low res. This is due to the settings that we've just defined.

Another factors that will influence the speed which RAM previews are going to be rendered is of course the audio usage and the layer switches. You can see that each layer has its own switch so you can determine the quality. Same goes for the frame blending, if you are using it. There are also fast preview settings over here under the lighting which actually works mostly for ray-traced compositions which I'm going to show you later in this course.

But some of the settings also apply over here. So for example, Wireframes are going to show you every time anything that you have in real time. In this 2D scenario, it doesn't really make a lot of sense. But you can see that when I'm pressing space bar, everything is actually going to show up in real time, Although it's just the Wireframe, it will still allow me to judge the animation. I'm going to bring it back to Adaptive Resolution. And I'm just going to mention that under the Preferences settings where it says Memory and Multiprocessing, which is over here, this is also a big factor which will impact the performance.

And I'm going to touch on this one later in this chapter. Of course, we also need to make sure that we understand what are the differences in terms of the renderer. So the options for the renderer between Classic 3D and Ray-traced 3D are also going to impact your RAM preview settings. So those are my advices on how to speed up RAM previews inside After Effects. If you can't be bothered with all those tiny details, at least try the Shift RAM options which are very easy to set up and will help you to calculate a decent result much quicker before committing to the final render.

1/8/2015
Get the most out of After Effects, with Eran Stern's After Effects Tips and Techniques. This installment is dedicated to rendering: increasing the quality and speed of your final export, as well as the RAM previews and prerenders you generate along the way. Eran shows how to optimize your system settings, addresses issues like flickering and upscaling, and introduces production-ready workflows that will increase your productivity and speed up interactions with complex projects.
Topics include: