Exploring important preferences and setting up the cache 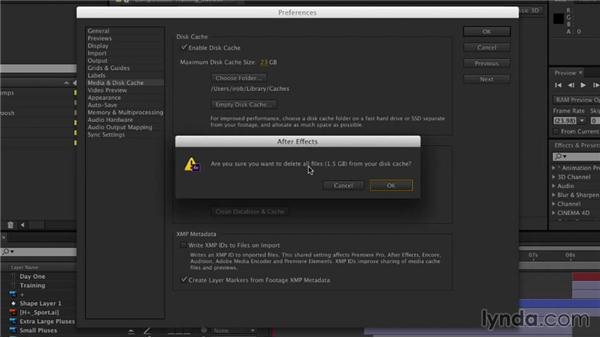 Before you start in After Effects, it's important to understand some key preferences. Now in this video, it really doesn't matter what project you currently have open, because, like I said before, we're going to actually just jump into preferences. So to get to your preferences on a Mac, you need to click on the word After Effects. Under Windows, you need to go to the Edit menu,. So I'll go to my preferences, and we'll start with the General setting. The first thing I want you to do is go down here to the fourth option. Make sure to select Default Spatial Interpolation to Linear.

This'll help when you're actually setting up your first sets of key frames. Sometimes if this Spatial Interpolation isn't set to Linear, you'll see these weird drifts happen. So I've found, it's just better to leave this on when you're first getting started with After Effects. And if you're unfamiliar with spatial interpolation, don't worry about it. We will definitely be getting to that when we get to key framing and animation. Now let's just to the previous section. In here, there's a button for GPU Information. If you click on that, if your system has an Nvidia graphics card, and one of the supported GPU accelerated graphics cards, you can enable ray tracing to actually be processed on the graphics card.

That really only matters if you're working primarily in the After Effects ray-tracing engine. And we won't be doing that for quite a while. So if you don't have this, don't sweat it. After Effects will still work perfectly well without it. But if you have one of the supported graphics cards, it can move things along more quickly, if you're working a lot in the ray traced renderer. Let's go to the display setting. In here, let's enable Hardware Accelerate for the Composition, Layer and Footage Panels. If you have a relatively modern computer, this option should be perfectly fine to enable.

Under the Import section if you find that you're working with a lot of still images, you can set a default duration for each still. By default when you import a still image, like a jpg or a tiff it will import and be the duration of the composition. If you want, you could just have it set up at one second or two seconds or what have you. Now let's jump down to Labels. With labels, you can assign a specific color to each individual kind of media that you might be working with within After Effects. I generally recommend leaving these set at the default settings, but, this is where you would go if you want to change how an object appears within After Effects.

Let's jump to Media and Disk Cache. This is arguably the most important section of your preferences, because this will increase the performance of After Effects exponentially. You'll most definitely want to enable this cache. And then go down to the button that says Choose Folder. You want to choose a folder that exists on the drive that's separate from your media files. Also, you want to choose a drive that's as fast as possible, so I prefer SSD drives to be my fast secondary drive. If you don't have an SSD drive, maybe a RAID array.

Now, if you ever notice After Effects functioning kind of strangely, you might want to come in here and just empty the disk cache. So I'll go ahead and just do that right now and notice I have a gig and a half of files, just sitting on my computer that I didn't need to reference. So I'll just go ahead click OK, and that's emptied my cache. Media Cache is extra information that after effects will store as it's working with the different media files. If you want to choose a separate place to save these files, you can go ahead use this same Chose Folder function. And again, if you find that After Effects is ever acting strangely, just go ahead and click the Clean Database in Cache button.

Just to make sure everything is, kind of, blown away. If you're one of those interface people that really like to have dark interfaces for their application, or bright interfaces, you can go to the brightness setting here under Appearance. If I drag it to the left, notice I can make the appearance very dark. Or if I drag it to the right, I could make it white on black. Let's go ahead and change back to the default settings. Auto-save is a helpful function. You can automatically save your projects and specify how long between your saves. Also, one of the things I recommend doing, is choosing an auto-save location that's separate from any of the drives that you're working on.

Maybe save it up to a cloud or a jump drive, or some other drive. The only reason I'm saying that, is just so when you're working, if heaven forbid anything should ever go wrong, you'll always have a backup set to a different place. Now let's go to the Memory and Multiprocessing settings. And here it's most important to understand that RAM in After Effects is shared between After Effects, Premiere, Photoshop, Media Encoder. You get the general idea. Now, you can specify RAM that's to be reserved for other applications.

Now, I just happen to be recording this on my laptop. So I only have eight gigs of RAM, which is a very small amount of RAM for what we're trying to do. Now, another thing you may want to consider enabling is Render Multiframes Simultaneously. If you do select Render Multiframes Simultaneously, I do highly recommend leaving the next option, Only for Render Queue selected. This'll make working in After Effects more fast. When you use your RAM previews it works more quickly not to have to render the multiple frames, so that's what this setting is allowing me to do.

You can reserve other CPUs for other applications. And since I am on such a limited system, I'm going to actually just disable the Multiframe Simultaneously option. And, like I said, for your system you can definitely enable this. The last thing I want you to pay attention to are your sync settings. In here, you can sync everything from your preferences to your keyboard shortcuts, up to your Creative Cloud account. Now, I like all the settings that I've gone ahead and adjusted. So I'm going to go ahead and click, OK.

If you ever decide, when you're working in After Effects, that you want to change your preferences back to the default. You can easily do that by pressing Cmd+Option+Shift on the Mac when you go to open the application. On Windows, you'd go to open the application and make sure to hold down Ctrl+Alt+Shift. That way, it'll ask you if you want to blow away your preferences, and you can say yes remove my preferences, and After Effects will be set back to its default settings.

Video: Exploring important preferences and setting up the cache