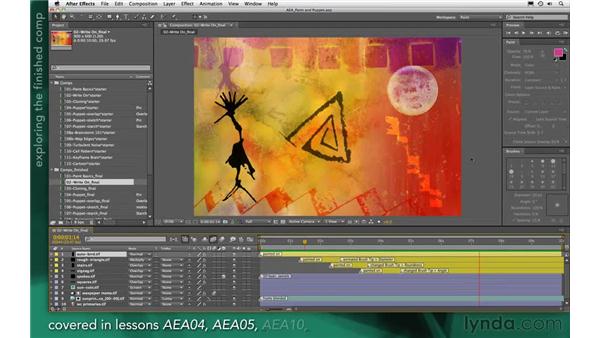 If you've been following along so far, I've closed the composition from…the previous movie.…If the Project panel is not visible, you can bring it forward by selecting…Window>Project or by using the shortcut.…To show you what I mean by revealing a layer, if you have the Exercise Files,…twirl down Comps_finished and open the second composition Write On_final.…Since we don't need the Layer panel, I'll just temporarily close it and I'll RAM Preview.…You'll see a number of layers are writing on overtime.…

I created all these layers by hand and then scanned them in.…I then combined them;…using techniques you've learned in earlier installments, such as blending modes,…track mattes, frame blending and even the wiggle expression.…We'll solo the first layer called auto- bird and we'll press U to see the keyframes.…You can see that this layer is wiping on over time, but it's not a…simple transition that you might get if you use the Linear Transition…effect on animated mask.…

It zigs and zags and follows the contour in an interesting way.…