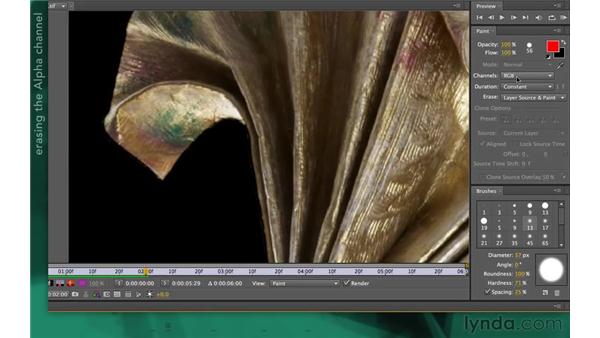 You can use the Eraser tool to remove parts of an image or just part of an…existing paint stroke.…You can also use it just in the Alpha channel.…To get started, add any image to a composition, preferably one that has an…interesting Alpha channel.…I'll continue with the same composition I was using in the previous lesson.…The first thing to do is to select the Eraser tool.…Remember that the options in the Paint and Brushes panels are different…depending of which tool is selected.…So be sure to select the Eraser tool first.…

I will start with the default settings which is to set the Channels pop-up to…RGB and Alpha, you have the same options as you had with the Brush tool;…the Duration to Constant and again, these are same options we had for brushes.…I won't be using all the different options for the Eraser;…I am just going to set it to the Constant mode.…The Erase options are only available when the Eraser tool is active.…The default is to erase the Layer Source, the image itself, as well as any paint…