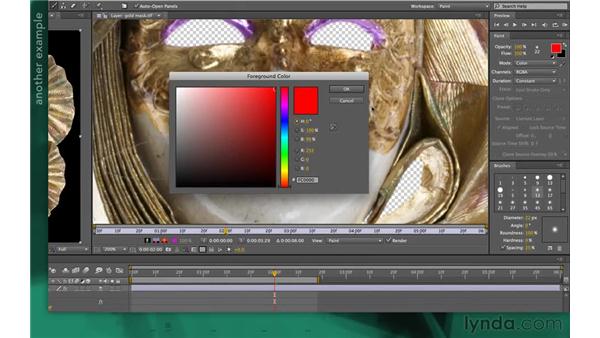 In this movie we'll continue to explore the Eraser tool. So make sure it's selected, check the Channels is set to RGB plus Alpha, Duration is Constant and now let's look at the different modes we have available in the Erase menu. So far we've only been using Layer Source and Paint. Let me erase the Layer Source and Paint, and let me set this brush a little smaller, it will erase the image and the paint stroke or just the image.

I'll undo and now let's set it to Paint Only mode. In this mode, only the paint strokes will be deleted. So this allows me to remove some of the paint strokes that I'm not happy with. When I erase in Paint Only mode it also creates a eraser strokes in the timeline. I'll delete these just so I can show you the next option. Earlier, I created three strokes, the left eye and the right eye and by the way I did increase the opacity back to 100% so you could see the color more clearly.

In Last Stroke Only mode I can remove a little bit of the color just on this edge that I wasn't happy with. And there is something very important to remember about the Last Stroke Only mode. If you noticed in the Timeline it did not create an eraser stroke. If I made a mistake when I was painting my last stroke I might want to just remove a little bit of paint without starting over and without cluttering up my Timeline with lots and lots of eraser strokes. When the Eraser is set to Last Stroke Only, there is no reason why you can't dab at the paint stroke and remove little parts of it because you don't have to worry about creating multiple eraser strokes.

You'll probably find this feature extremely useful. Let's try another example and then I'll show you a more efficient way of working with it. I'll return to the Brush tool and I'll set the mode back to Color. Since we know it works pretty well painting on top of the mask. I'll set the Channels to RGB and Alpha and we'll pick a nice color, maybe a little bit of rouge, maybe a little pinker and we'll set the Opacity down a little bit and we'll get a nice big brush.

So let me say I just wanted to paint a little bit of rouge around here and then I say I like most of it but I don't really want this portion right here. In order to start erasing I might want to set my Eraser to roughly the same size as my paintbrush. So you'll want to do that first before you go on. So I'll set the Eraser tool and we'll get a slightly bigger brush and I'll just set the Hardness to zero, so it's also nice and soft.

I'll make sure my Eraser is set to Last Stroke Only and now I can remove a little part of the color that I wasn't happy with. Again, the last stroke was Brush 1 and I could call this right cheek, and notice none of the eraser strokes are appearing in the Timeline. So now that the Eraser tool has the right size of brush, let me show you an even faster way to do this. I'll return to using the Brush tool and we'll paint the other cheek.

Now I'm noticing that my previous stroke is still selected, because I've just renamed it. So I'll press the F2 key to deselect. Otherwise, I'll just replace my other stroke. I'll paint some color on the other cheek. I have the same color in settings and then now to erase the portions that I don't need, I simply press Command+Shift on Mac, Ctrl+Shift on Windows and that switches automatically to the Eraser tool in Last Stroke Only mode. So this is a very handy technique. Just so you can see another example I'll move a little higher up the image.

So you start painting with the Brush tool. That adds a new brush stroke. When you press Command+Shift on Mac, Ctrl+Shift on Windows it automatically switches to the Eraser tool. You can see that because the size of the brush is a little different. Of course before you use this handy shortcut, you will have to set the size of the brush. And again you can also make it very small, so you can paint small strokes and when you press Command+Shift you'll get whatever size the Eraser tool is set at.

Also notice that I'm only erasing the last stroke I've painted even though the eraser is moving over the eye lid. When I check the timeline I see only the paint strokes and none of the eraser strokes. I think you get the idea. In the next chapter I'll show you how to reveal an image over time by animating a paint stroke in the alpha channel.