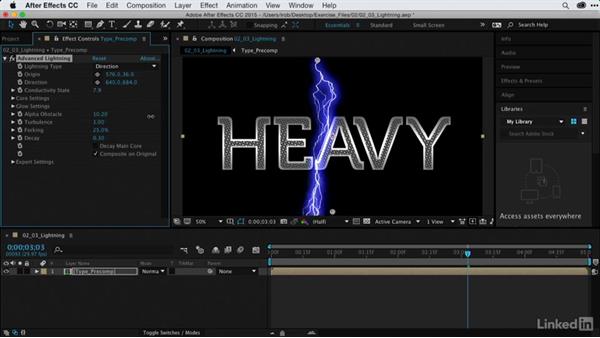 - Now is the time where you can get as cheesy or as serious as you want to be. Because now, we're going to animate some lightning bolts inside of After Affects using the advanced lightning effect. So, if we look at our project, you'll see I've got three layers, here. And if your fonts aren't activated, you may want to go to the Creative Cloud desktop application and make sure to add Museo as one of your fonts from Typekit. Okay. So, just so we're working in the same interface, I'm also going to go up under Window, Workspace, and I'll reset my workspace to the Standard or Essentials workspace.

There we go, the Essentials workspace. Okay, so now that we're in the Essentials workspace, and we have our project set up, let's look at the layers and how this project is built. I've got a text layer here on the bottom that has my gradient. And then I have a dark gray solid which is applying this middle texture. And it's looking at the text layer above, that's giving the alpha transparency that's kinda bumping in the edge of this effect. Now the way lightning works, or the way I like to work with lightning, especially if I'm trying to electrify an object, I like it to be applied directly to the layer that has the alpha channel that I'm trying to actually mess with.

Now since I have multiple alpha channels here, what I want to do is pre-compose all of these layers. I'll just drag a lasso around all three layers. Go up under Layer and choose Pre-compose. Here, I'll just call it Type_Precomp and click OK. And now you can see for layer one, it's all one layer. And if we open up the Alpha channel here or view the Alpha channel in the comp panel you see it, too, is happy. So, let's go up under Effect and we'll go to Generate and I want to choose Advanced Lightning.

Now notice the second we apply it, it turns off everything else, so we need to come down here to this bottom option. If I expand my effect controls here a little bit, you can see it says Composite on Original. So let's go ahead and select that. Now, it may not appear as though anything is happening, and that would be correct. If I press the space bar, notice nothing is playing. You actually have to animate a property in Advanced Lightning to see animation.

Now, making sure to stop playback here for a second, I'll scrub on the Conductivity State. Notice when I do that, now my lightning is actually flickering around the scene. Now, in order to make this lightning interact with the word "Heavy", I need to turn up the settings for my Alpha Obstacle. So I'll click and drag and, notice the second I increase that number, it's definitely changing how the lightning flows right along the letter "A", here.

And if I actually go way high, it'll stop the lightning from going past the letters. But, I actually like how it sort of shoots past the letter here a little bit. So I'll set it somewhere around 11.70. Now another way to add animation is to actually move where the lightning is striking from. So here, I'll just click and drag on this lightning bolt. And notice as I drag it around, it's gonna wrap around different parts of the letters. The general direction that I'm having this lightning bolt strike is determined by this Direction setting, here.

Where, if you notice here in the comp panel, notice I have this circle with a cross, that allows me to point my lightning in any direction I choose. So here, if I kind of make it flow across the letters, you can see I've got something really kinda cool as it's interacting. Now, I want my lightning to start off the screen. So I'll just move it off the left side, here. And now we can go ahead and create our animation. I'll move my current time indicator back to frame zero.

And I'll add a key frame for my Conductivity State. Let's move down to the end of the composition, and just crank through some of the different options here for our Conductivity State. And then if I press the space bar, you can see I've got some pretty heavy lightning interacting with my text. Finally, what if you want to have multiple lightning bolts in the scene? I mean, why not, right? If we're gonna have lightning strike twice, it might as well be in our own composition. So, in order to add more than one lightning bolt, rather than duplicating the effect itself on the one layer, it makes more sense to actually duplicate the entire layer.

I'm gonna press the space bar to stop playback here to show you what I mean. I'll move my current time indicator back to about one second. And I'll select layer one and press Command + D or Control + D on Windows, to duplicate the layer. So, with my duplicate, I could tell it to not composite on the original. And then I can change the Origin position. So here, I'll click on my Origin target and move that over to the right side, here. And notice, now since I've moved the Origin, it's actually interacting with this side of my type.

And I've created a second bolt. If you want to see exactly what this looks like, enable solo for that layer. And notice, since I don't have Composite on Original, it's only showing the lightning bolt. But, since the lightning bolt is contained on a layer that has the proper alpha transparency, it'll still look at that alpha channel to determine the proper Alpha Obstacle. So, if I turn off my solo layer, we can preview the animation. And now, we have indeed made lightning strike twice.