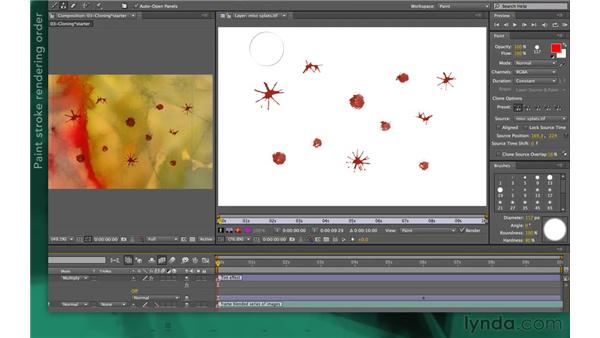 In the last movie, I made a bit of a mess. I think I will simplify it by deleting the Paint Effect, as I show you how to edit and animate a Clone stroke. I will return to preset number 1 which used this element as an origin point, and I will create a clone. I will press PP and that will twirl down Paint in the timeline. And here is Clone stroke 1. The Clone stokes are very similar to the brushstrokes. They have a Path property, Stroke Options, and Transformations.

When you select a Clone stroke, you will see its anchor point in the Layer panel. If I press V to return to the Selection tool, I can drag the Clone stroke around and reposition it. You will also find the position value on the Transform, and you can scrub that value in the timeline. Don't confuse the position of the Clone stroke with the position that appears on the Stroke Options. Here we have Clone Source and Clone Position.

Scrubbing Clone Position changes the area that you're cloning from. The other parameters in the Transformations like Anchor Point, Position, Scale, and Rotation should be pretty familiar. For instance, you can rotate the element that you've cloned. In fact, let's just set up a couple of keyframes. I am going to rotate this, say, three times. Now I would like my Layer panel to RAM preview. So I am going to turn on the Always Preview this View switch.

Now when I RAM preview, the Layer panel will play back. Of course, I can also scrub the timeline in the Layer panel. If you change the value for the Anchor Point, the element will now rotate around the new Anchor Point. So nothing too surprising there; let's return that to 0 and of course, you can scale it so the Clone stroke is a little different from the original. All of the other options are very similar to what we saw over the brushstroke.

Now let's consider the rendering order for a Clone stroke. I will return to the Clone Stamp tool, make sure I press F2 so I don't replace my first Clone stroke. I'll create another one of these elements. Right up here, I'm still on preset number 1. Let's say I would like to erase the original element. That way I can just have a Clone stroke that I can animate. I'll select the Eraser tool and let's check the settings. I don't want to create transparency. So I will first set the Channels to RGB only.

If I erase now, I'll end up with a black background color. So I will click the black-and-white switch that makes the Background Color white. I also don't want to erase the Last Stroke. So I will select the layer Source & Paint. The Duration of Constant should work. Make sure I am back at time 0, press the Command key to resize my brush, increase the Hardness value as we don't need the soft edge, and now I can delete the element with just one click.

Now you see I have Eraser 1 in the timeline. It's very important that Eraser 1 is rendering after my Clone strokes. Notice if I drag Eraser 1 down the timeline, it now renders after Clone 1, but the second Clone stroke I created at the top-left is no longer visible. That's because Eraser 1 is removing the element before the second Clone stroke is able to do its job. So do keep an eye on the rendering order. Of course, once I have removed the element, I can't now move this element down into the original position.

If I try to do that, let's select Clone 2. We will change back to the Selection tool. You will notice now it's just moving that element behind the Eraser stroke because the Eraser stroke is rendering last. Before we go, let's take a look at the final composition. I will RAM preview. This style of cloning might be handy when you are adding more stars to the sky and of course, it works on video layers as well. You can even offset the frame it's cloning from, using the Source Time Shift feature.

However, it's often the case that if you are cloning a large object, it might be easier to just duplicate the layer and then use the masking tool to isolate the object you're trying to clone. Once the object is on a separate layer, you will have more control when you want to animate it or apply effects in blending modes. In the next movie, I will cover some options for shifting time.