Editing and Animating to Sound with Adobe After Effects 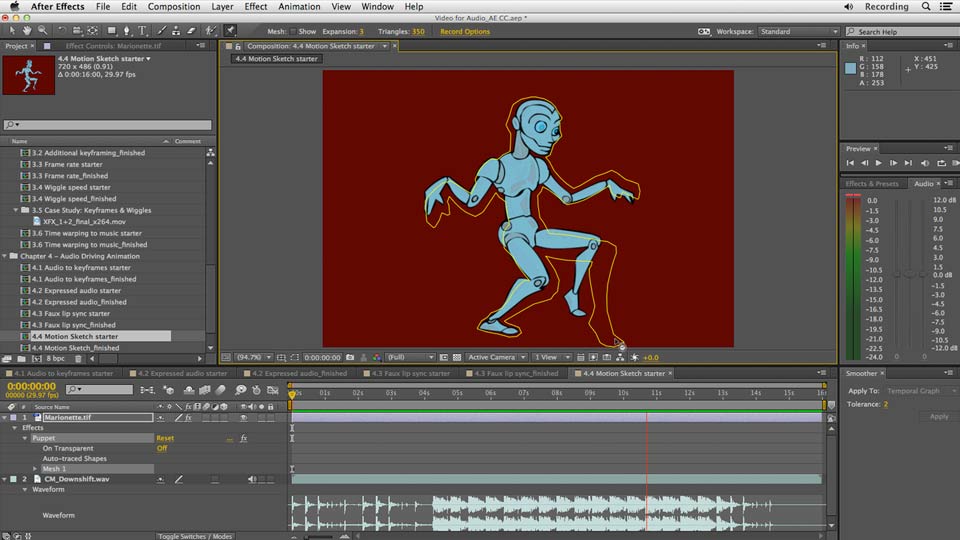 - Hi, I'm Chris Meyer of Crish Design. Although my wife Trish and I are probably better known for our visual work, we both originally came from the music industry. And we really feel that that understanding of sound and music has given us a distinct advantage, when it came time to edit video, animate 3D objects, or otherwise key frame a motion graphics animation. Therefore, in this course I want to share with you some of those techniques so you can improve the impact of your visuals as well. Now, when sound and visuals aren't synchronized, at best one may dilute the effort of the other one.

At worst, one might even distract from the other one, making the viewer listen to something when something more important is going on on screen at this moment. However, when you do tie together sound and visuals, the result truly is greater than the sum of the parts. You have something that really draws your viewer in, makes him receive your message better, and makes them even want to see that piece over again because they had such a good time watching it. And things tied together so well. In this particular course, I'm gonna be using a combination of tutorials, where I step through specific exercises, as well as case studies, where I show you some finished work, and give you some of the ideas that we were thinking of when we created these pieces.

And what tricks and techniques we were trying to use to tie together the visuals and the audio. In the first chapter, I'll cover the basics of sound, how to read an audio wave form and understand what those squiggles really mean. We'll then use that knowledge to spot important hit points in music or dialogue. This includes how to leave useful notes for yourself inside your project. Which will make it easier to identify potential edit randomization points later. I'll also dive into how to translate between the video world of frames per second and the musical world of beats per minute, including a table of magic tempos that work best for soundtracks.

And how to create yourself a temporary click track to animate to while you're waiting on the final music. In the second chapter, I'll focus on cutting video to music. This includes spotting important points in the soundtrack, making an initial first edit based on those points and refining your edits to line up events inside each video clip to events inside the music. We'll then perform transitions between those clips also in time with the music. I'll talk about how to make staccato cuts based on subdivisions of a musical beat. And I'll walk you through a couple of case studies that put these principles to work, particularly spending time on how you might cut text to music to make sure that the viewer has time to read everything you're trying to get across to them.

In the third chapter, I'll move onto animating graphics and effects to music. I'll start with an example of adding text over already cut video, including animating the text on and then using effects to wipe it back off. Again, all in sympathy with the music. I'll show how to alter the frame rates of sequences, so that frames played back in time with the beats and also how to tie special effects like wiggles to match through the rhythm of the music. I'll walk through another case study that uses several of these techniques. And then I'll show you how to time remap footage to better align events within it, again to match your soundtrack.

In the fourth chapter, I'll demonstrate some advanced tricks to have sound actually drive your animation. Including how to make music, or dialogue, directly bulge a speaker cone, or make the lips flap on a mannequin. And I'll end with a quick demo of how to use motion sketch to hand animate an object while listening to a sound track. Although I will be using Adobe After Effects for the examples in this course, the concepts are actually somewhat universal. You can certainly apply them to whatever nonlinear you're editing, 3D animation, or motion graphics package you happen to be using.

So, I think it's worth your watching even if you're not specifically an After Effects user. If you do happen to use After Effects and you have access to the exercise files, the next movie I'll be talking about what are included in those files. And also at the very end talking a bit about music licensing, everyone should really watch that section. Regardless, I really think at the end of this course you're gonna have a much better idea of how to create visuals that have a lot more impact when played back with music, dialog, or other sound. So with that, let's dive in and let's have some fun.