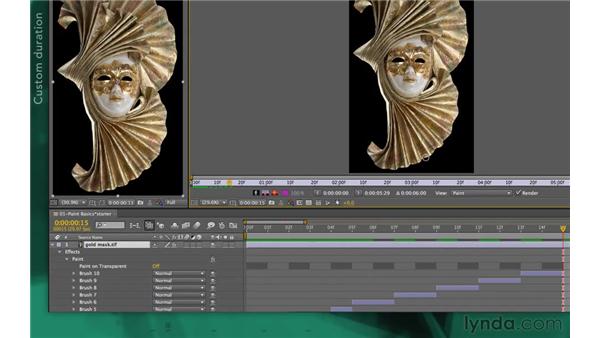 Join Chris Meyer for an in-depth discussion in this video Duration options, part of After Effects Apprentice: 13 Paint Roto and Puppet.

I'm still in the first composition.…I selected the layer, and selected a Effect > Remove All. That removes the paint…effect and starts over with a clean slate.…I will select the Brush tool and then in this movie we're going to cover the…options for Duration including Single Frame and Custom. I'll cover the Write On…option in the later movie.…So set the Duration pop up to Single Frame. I have a pretty large brush here, so let…me just change it to something very small and any color will do by the way.…

I will press the Home key and that will set the current time marker to the…beginning of the comp and just make the little stroke there.…Now I'll twirl down the paint effect in the time-line, and Brush number 1 is a…single frame in duration.…To see this better I'll the press Semicolon (;)…that's the shortcut to zoom in as far as possible.…Now you'll see stripes in the timeline indicating individual frames.…I can press Page Down to advance one more frame and you'll notice my first…stroke is no longer visible, it's only showing on the first frame, let's make…