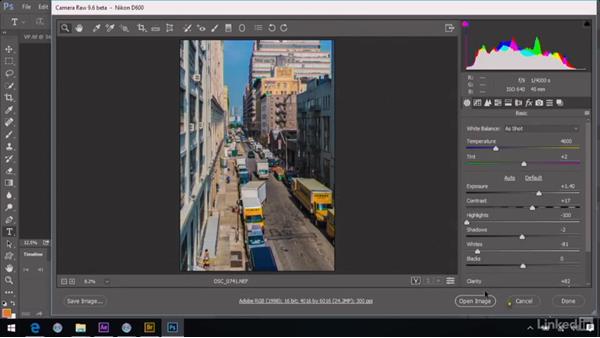 - The use of vanishing point allows you to draw perspective planes in an image. And that's great for cloning, but you can also export those planes to After Effects basically creating a simple 3D model or environment. The planes will be turned into individual panels. Let me show you an example of this and then I'll build it from scratch. Let's open up this project here.

Let's drop that to half quality. And what you see here is a bit of a perspective move. Notice how the walls along the edge seem to move a bit. That's because we've actually created a little bit of a 3D environment. Now, let's turn off Adaptive Resolution for a second. Now you'll notice in this case that as I play this back we're getting a sense of actual perspective.

It's subtle in this case, but I took a photo of a street, and instead of just zooming and panning like you might in a non-linear editing tool, I've actually created a move that feels a bit more dimensional. Look at the windows here along the side. As the camera pulls back, it feels like we're actually moving past those windows. Well, that's because in a way, we are. So if you look here, let's zoom out a bit, you can actually see the environment. The ground, the side walls for the street, and the background.

Well what's happened here is we're actually moving down the street. The camera pulls back in three dimensional space and what that creates is a feeling of movement. Let's zoom in a little bit here and drag through that. And you can see we've created a sense of perspective, and it feels like the camera's lifting off the ground and moving past the walls. Well, that's pretty cool, but in order to do that, you need to create a 3D world.

Let's switch over to Photoshop. I'll start with bridge, and open up this Photoshop document. If you want to go all the way back to the raw file, I've included that as well. But, I've set up a basic Photoshop document so you can see this. Here it is, and in this case I've already drawn the vanishing point lines. So let me show it to you and then I'll do it over again. If I choose Filter, Vanishing point, you'll see that we have a series of lines.

There they all are. Now, let's build that from scratch. I'll click Cancel, and we'll go back in and open up the raw file. There it is. We'll uncheck Open as a smart object, and choose OK. And now open up that image. There it is. Using your image size command, or control + alt + i, you might wanna reduce the total pixel count a bit.

This will speed up the performance. I'll take the width to about 2500 pixels for example. And press control + 0 to zoom in. Now, I'll choose Filter, Vanishing point. This allows me to create the planes. Now, I'm gonna press control + minus to zoom out a little bit, to see things for a second, and I need to draw the street. It's gonna be important to get it right so let's actually zoom in first, control + plus, and I can hold down the spacebar.

Now, I'll click to define the top of the street. There it is. And now drag forward. Now you might need to zoom out a little bit in this case and you're gonna find yourself extending beyond the canvas, which is okay. There we go. And I'll come over here, try to keep that relatively straight, and there we go, click.

And now, we have a street. Now if the grid's too dense, remember, you can make that grid size a little bit bigger, which will make it easier to see. Now, clicking on the grid we can tear off more edges. Let's zoom in a little bit, control + plus. If I hold down the control key and click on this middle dot, I can tear a new surface upright. And it drags it up at a 90 degree angle. Now, again you might need to zoom out a little bit and continue to refine that.

There's that surface. Here's the next one. Click on the bottom plane, control + drag from the middle point, and tear it up. There we go. And let's zoom in here, grab the back wall, hold down the control key, and tear off the end of the street. There we go. Now once you've done that, to create a little bit of overlap you might make that slightly bigger.

So we'll extend that up and then grab the edges here and pull that out to create a background plate. There we go. When you're done, I suggest clicking OK to store the results of the filter. You can then open it back up. And you'll notice that the planes exist. Now if I look at that, I can see that my perspective planes indicate the environment pretty well.

Now it's time to move on to exporting it for After Effects.

10/18/2016
After Effects has a powerful toolset, but there are some things Photoshop just excels at. Namely, manipulating raw images, color, and perspective. If you're a Creative Cloud subscriber, you have access to the entire suite of applications. So why not take advantage of both toolsets? In this course, Rich Harrington shows video professionals how to fully integrate Photoshop into a variety of After Effects workflows, including repairing images and building new assets for motion graphics and video effects.

Learn how to properly develop and then optimize raw files to increase performance in After Effects, and use Photoshop's advanced typographic controls. Find out how to use layer styles to add bevels, overlays, and glows, and correct lens distortion, chromatic aberration, and vignetting. Rich also introduces a unique use for Vanishing Point, which allows you to export 3D objects for parallax movements and virtual sets. Plus, discover how to save out depth mattes for backdrops and keying, and use the powerful Content-Aware tools for background plates, set extensions, or recomposing assets. There's a lot to learn! Start watching to incorporate Photoshop's advanced tools into your next After Effects project.
Topics include: