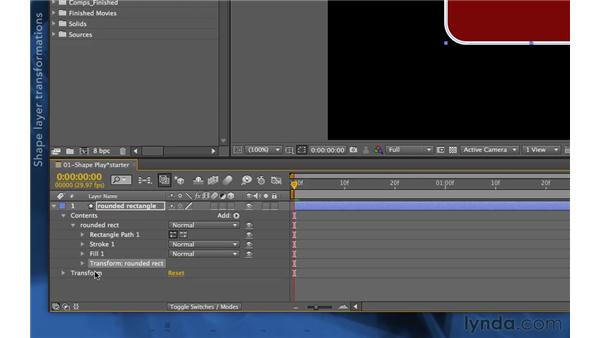 We have a blank composition with no layers selected. We've selected a Rounded Rectangle tool. We'll set up our initial fill and stroke colors. It's time to draw a shape. I'm going to start by clicking and dragging in the Composition panel, but before you let go of the mouse button, there are some great shortcut keys I want to show you. While your mouse is still down, if you hold the spacebar down, you can reposition your shape. So if you find you've been drawing in the wrong place, this is a way to quickly move it into the right location. Another great shortcut is if you hold Command on Mac or Ctrl in Windows, it will change where you're drawing the shape from.

Normally, you start drawing from one corner outward, but if you hold Command or Ctrl, instead you will be drawing centered around your initial click. That's particularly handy when you are trying to draw circles. I'll release Command or Ctrl, and I'll just drag out from the corner. Before I release my mouse button, there are other parameters I can change as well. For example, the up and down cursors allow you to change the rounding of the corners. You can also hold the cursor down and you'll get automatic increment of that rounding.

You'll see down here that we now have a new layer called shape layer 1, and just like any layer, you can rename it. I'll rename this rounded rectangle. Underneath its main twirly called Contents, you will find something called Rectangle 1. That is the name of the shape group you have created. And again, you can rename those, rounded rect. I'll twirl that open, and you'll see what makes up the shape group. I have my path, in this case my rectangle, my stroke, the color I set at the top, my fill, and I have individual set of transform properties: Anchor, Position, Scale, Skew--a new parameter--Rotation, and Opacity, which is separate from the transform for the entire layer.

This is where shape layers can be very powerful and very confusing, because you need to manage all these different settings. It's best to focus on editing the shape group and then later on if you want, move the entire layer. Let's explore some of these components of my shape group. I'll twirl open Rectangle Path 1, and again you can rename that if you wanted to. And here I have its size. Initially its Aspect Ratio is maintained, but if I want to change it, I can unclick the Constrain Proportions lock and now edit its dimensions independently.

The position of its path starts off centered in this group, but this group is not necessarily centered in my composition. I'll show you that in a second. And of course, we have the Roundness parameter we were editing earlier using the cursor keys. Notice that all these have animation stop watches, by the way. Shape layers have a lot of animation possibilities. I'll twirl that up. With Stroke and Fill you can reorder objects inside a shape group. Right now Stroke is over the Fill, but if I drag Fill above the Stroke, you can see what's going on here in the Comp panel.

Now that red fill is going out to the center line of the stroke, and you can see it's being drawn on top of the stroke. So you can reorder those elements as desired. Here's the Blending mode pop-up you saw earlier when we were playing with the Fill and Stroke options, and if you twirl these open, you'll find lots of additional options, which we'll go into more detail with later on. Finally, as I mentioned, each shape group has its own transform properties. We'll twirl that open for now. This particular position value is the offset from the center of the entire layer.

If I want to make sure that a shape group is centered inside its layer, I need to zero these out, and I'll do that now. This is something you'll find you need to do quite often if you want to center up a circle, a star, et cetera, in your composition. Go into the Transform for that group and 0 out its position. We also have Rotation, Skew, and the expected Scale and Opacity values. Notice that this Scale value is different from the rectangle's Size property.

That's important because you can have multiple paths inside one shape group, and we'll show that later on. Also, Opacity is for the final composite of everything in the shape group. Yes, Stroke and Fill have their own opacities, but this is the master opacity for the shape group, not to be confused with the layer's own opacity, which also fades out the entire layer. Lots of flexibility, lots of power, lots of room for confusion, so be very mindful down in the Timeline panel, exactly what it is you're editing.

Are you inside a shape group or editing an overall layer?