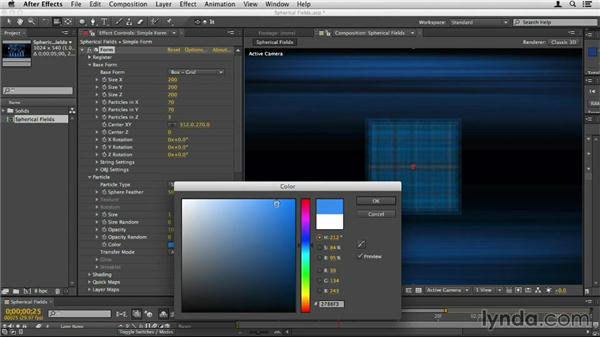 Join Chad Perkins for an in-depth discussion in this video Distorting with Spherical Fields, part of Learning Trapcode Form (2013).

Now before we get to applying all the cool stuff we've been learning in this chapter in the next movie, I want to take one more movie and explain the spherical fields. It's an additional distortion type that you can have to displace particles in addition to the fractal field. And really quick before we get into that, I want to show you this about the curve drawing interface, a really important note. And we're starting here exactly where we left off in the last movie, where we have this curve drawing interface where we have no fractal field distortion, and then we have the distortion up here at the top.

So, what we're going to do for starting from scratch is select Form, hit Delete, and then we're just going to apply Form all over again to this layer. Now, let's get into talking about this spherical field. Now, about a year ago, I did visual effects on a short film, and I had a ring in the shot. And we have create this kind of glow around, so my first thought was I would use the form and I would use the sphere base form and if I increase the size of this form get it Bigger here, a little bit wider there. My first thought was that I would go into quick maps. And I'll open up map one here and we'll create kind of like this bell curve and I'll map capacity over y.

And let's go ahead and shrink that, so that's just a small little hoop in the middle. (SOUND) There we go. Small little hoop in the middle, and then we could even go up to Size Y, shrink that down, and then if I select my Unified Camera tool, we have kind of like a ring of particles, a cool ring of particles. But the problem is that I really want these to displace, actually, let me take this down to 1. I really wanted these to displace, and if I open up my fractal field and displace this, it doesn't quite get the results I wanted.

I wanted real, a pronounced ring in the center and then cut of magic. And I've glowing around the center. Well, we could actually do this with the spherical field, just again, as a different additional distortion field, in addition to fractal field. I'm going to go ahead and reset this whole effect, and I'm going to go down to my camera, and I'll reset that. I'll open that up, click the Reset button next to Transform there. And lets go back and give this a prettier colour, I am going to actually reset that, Map 1, and I'm going to particle, click the Colour give.

I give this is a nice little kind of, kind of we did in the last movie there, may this a little bit bigger and then x and y, add a little bit more in the way of particles. And let's go to fractal field and increase the displace value, so we have a cool foam like distortion area here. Even effect the size a little bit, a passy a little bit, if you wanted to just Kind of enhance that shape a little bit. Now what I want now is with this form, it's already animated, already looking really cool, what I want is kind of a hole in the middle where the ring would be, and that's where the spherical field comes in handy. So I'm going to close up fractal field and particle and base form, open up spherical field and let's open up sphere one, there's actually two identical Fields here that we can use.

And I can go ahead and click on visualize fields so I can see where this is going to be. I'll go ahead and select my regular selection tool here, and we can move where this is going to be, but I'm just going to go ahead and increase strength, and as I do, it distorts those particles in that center, as if there was a sphere there. And now as this moves it's almost like those particles kind of wrap around that sphere. Let me increase the radius and make that a little bit big bigger.

And I'll go ahead and turn off the visualized field so we could clearly see what's going on here. But this is great, this is exactly what I wanted. We do have a few more particles kind of wrapping around the front which is a little bit distracting. So, what I could do is I could increase the strength. And I can also adjust the position Z which changes distortion, because it moves the spherical field forward and back. So, we could even push it back so it's not affecting the field and then animate it so it comes into contact. Like it's like a ghost moving forward through the fractal field, and that's a kind of cool there.

Now having a problem getting this sphere so there no particles in front and behind it, so what I can do is increase, let's say for example the scale Z. So, if I make this really big along Z, it makes it so that particles can't really go in front of it there. It's, or at least the spherical field that distorts them is getting bigger, and so they have farther to go, and now we create this really cool ring of plasma. Now we get soft in the edge if we don't have a hard edge there, if you don't want to have a hard edge we can do that if you want, although we do have a huge sphere there so its going to be pretty obvious either way. We could also, if we scale this non-uniformly, which I've done here, we can rotate this and so we're not rotating the particle. We're rotating this spherical distortion field.

Put that back down to zero. So if you want to create a cool ring, you often see this a lot of times with, like, network logos. They'll put their logo in the middle and have, kind of have, like, these form particles around it. And keep in mind, too, we can always go back to our base form and we could increase the particles, and X and Y, creating something like, you know, a more dense particles around the edge here. So we have some really great stuff here. It with, when we use the fractal field and the spherical field, fields together if that's what the situations calls for.