Defining and styling the individual particles 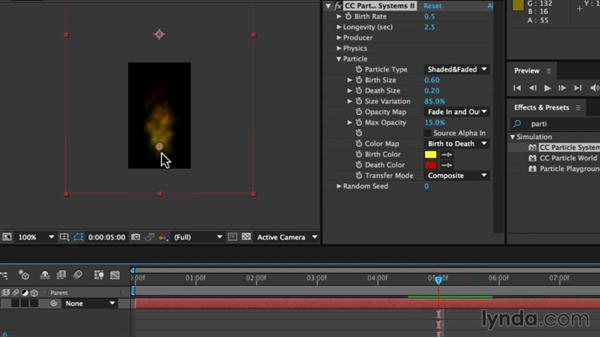 - Now we're going to work on changing the individual particles that are part of our particle system. So let's come over here and toggle closed the Physics section and let's toggle open Particle. So the first thing we're gonna do is under Particle Type, we're gonna change this from Line to Shaded and Faded Sphere. Once we make that change, you'll see this already starts to look like smoke. So instead of the individual lines, which were part of the fire animation preset, we get something that's already starting to look a little bit more like smoke or steam. Now for the birth size, this is the size of the particles when they're first born.

If we come in here and increase these, we can see that they are born really large. And then the death size is how big the particles are when they die and they last for 2.5 seconds under the longevity. So if I made the death size really small, and the birth size really large, scrub the timeline, we would see that we would have particles that are born really large and then they get much smaller as they die. Now for steam, we're gonna want to come down here and set the birth size to .6.

Hit tab and then we're going to set the death of the size to .2. So we do want the particles to be a little bit more smaller when they die, but we don't want the birth size to be too large. Now for the size variation, this will randomly set different sizes for the individual particles, just to add a little bit more randomness to the design. So for size variation, let's come in here and set this to 85% and then hit tab. So now you'll see that we have some particles that are really small and some that are larger, but they are all going to have this same proportion of birth size to death size.

Next we're gonna set the max opacity. If I scrub this up and down, this controls the maximum opacity of any particle. So by setting this to 15%, this means that no particle will ever be greater than 15% opaque. Now above the max opacity setting, there is what's called an Opacity Map. By default it's probably set to fade out, but I'm gonna come down here and choose Fade In and Fade Out. Once I select this, you'll see that the particles will fade into existence as well as fade out of existence over the longevity.

So this will give us something that looks a little more realistic. As I come down here and scrub the timeline, you can see that the particles are being born. They're transparent. Then they fade into existence and then fade out of existence. Next we have the colors for birth and death. By default these are set to yellow and orange, which again were from the animation preset we had earlier. Let's come in here and click on the color swatch. So for the birth and death color, we're gonna select white. So let's come in here and click OK. Click on the red swatch.

Set this to white as well. Then click OK. So now the color of this steam is always consistent and it'll always be white from birth to death. Now at this point we have pretty realistic looking steam. If we come down the the timeline panel, hit the spacebar or press play. We can see the particles being born. They're set to random sizes. They fade in, live for two and a half seconds, and then fade out. Now there are some particles in here that still look a little bit strong and it looks a little bit hard edged, so we're gonna use another effect on top of our particle system to blur this a little bit more.

Then hit a tab. Now for the blur length, let's come in here and set this to eight and then hit tab. So now with a directional blur in a place with a blur length of eight, we can see that this really starting to soften the steam inside of here. So the blurring effect is being applied after the particle effect. And now down in the timeline panel, I hit the spacebar or you can press play and now we can see a preview of this animation. So now we can see how dramatically different this particular animation looks from the default, which was the fire or firework effect. So now we have something with greater resistance, which makes the animation slower.

It's much more amorphic and the blurring effect really blends all of the different particles together to make it look more like steam. And now at this point, we're ready to start adding some key frames and controlling the birth rate across time.

4/14/2015
Learn to create a realistic steam animation with After Effects. In this course you'll explore styling and looping a particle system animation to create an HTML5-based steam effect, and then build it into a sprite sheet that can be played back in any major browser. No prior knowledge of After Effects is required, and the sprite sheet player is included in the exercise files (free to all lynda.com members), so you can test out your results right away.