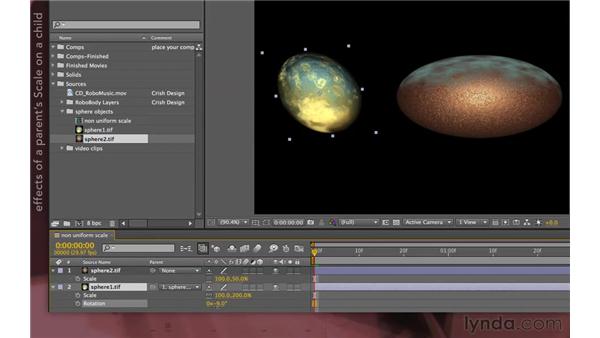 In this sidebar I'd like to show you a gotcha that can crop up with parenting and how to fix it. You don't need any particular source files. Anything around will do. If you were in the first project file that came with this lesson, you can go ahead and use that planted layer. If you're in the second project file, I have saved for you a pair of sphere objects. To demonstrate this I'm going to create a composition, again using a square pixel preset. I'm doing that just so you can see the distortion more clearly. This works at any composition size. And I am going to title it non-uniform scale, because that's the name of this issue.

I'm going to drag my two spheres into this composition and let's say that I decided that this sphere will be the parent and this one will be the child and let's say that my design happens to dictate that this sphere needs to start out distorted. So I'm going to type S to reveal scale, turn off its Constrain Proportions and squish it into an oval. Say so it's roughly half as tall as it is wide. So you can see what's going on underneath the hood.

I'm also going to reveal the Scale for what's going to become my child sphere. It sorts out at 100, 100. I parent this sphere into large copper sphere and watch what happens to the Scale value. It becomes 100, 200 even though it did not change apparent size in the Comp panel. Here is what's going on underneath the hood. Whenever you parent one layer to another, After Effects should not change the appearance of the child. However, the parent's transformations and the child's transformations are factored together to determine the final appearance of the child.

Since the parent was already scaled 50% in Y, under the hood After Effects had to scale the child by 200% in Y. So 50 times 200 gets back to the original 100% scale. Convoluted math it may seem, but that's what going on to maintain the original size. Normally, you can just ignore this. But what happens if you decide to say rotate this child as well? As I do so you see something very strange going on. Basically, the parent is casting a sort of reality distortion field around that child.

You're not rotating a nice sphere; you're rotating something through this distortion. And obviously this might not be your desired result. So let's go ahead and undo back to where we started and show you a better solution. Once again, we are going to use our friend the null object. I am going to create a Layer > New > Null Object. Give it a name such as scale correction. You can give it any name that you want. Just to I can keep my hierarchy straight, I'm going to put it between the spheres, because it's going to sit between these two in a parenting chain and soak up those non-uniform scales.

I want my null to be centered over my parent. So I am going to select my parent, reveal its position, copy it, and paste onto the null so that they are centered up. They'll transform from the same position and type S to reveal the nulls of the scale. I'm going to attach the null to my intended parent. You'll see it gets the same scale distortion as we had before, but since null objects do not render, it's basically soaking up that distortion. Now I can take my child, parent it to the null, and you will notice its scale does not change. Well, why is that? That's because 50 times 200 means that so far through the parenting chain we have a 100% Y-scale, therefore no strange distortion needs to be done to the child to make it look the same in the composition.

The null object has soaked up all of those strange distortions for us. Now when we rotate the child, it does exactly what we expected to do, no reality distortion field. So not only do null objects make fantastic parents when you're creating a parenting hierarchy, they also make great connectors in-between objects in a parenting hierarchy to help us soak up these non-uniform distortions and also just be good things to attach other children on to. If you ever have something weird happened late at night, remember this movie and remember this trick.

Use a null in between children to act as a mediator in-between them.