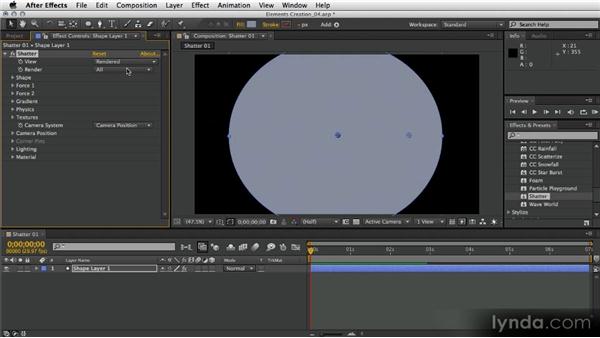 In this movie, we are going to create a physical explosion using the Shatter Effect. Actually, it's going to be a double physical explosion, and it's going to be used as one of our main graphic elements. And like always if you want to follow along, I'm inside elementscreation_4 which you can find in the second folder of the Exercise files. Now before we'll begin, I just want to return quickly to Illustrator where I still have my document open.

And basically I want to copy the colors that we've created our Color Scheme. Now since After Effects, at this point, doesn't have a built-in Swatches panel, you can't really Export the swatches and Import them into After Effects. Except if you're using a third-party solution or some free scripts from Adobe. I'm not going to show you this or take the long way, because we basically just need to sample course here and there. So I'm just going to do the rough quick and dirty way of capturing part of my screen and then import it back into After Effects.

If you're working with a PC you have a couple of utilities to do so. You can either press on the Print Screen and then take the whole picture and Crop the area that you like. And if you're working on a Mac, you can press Cmd+Shift+4, and then just marquee around the area that you want to capture, and let go. This will take a snapshot of this screen and then you can rename it and import it of course to After Effects.

I've already set this up for you so even if you don't want to this or don't have the patience you already get the files from me. So let's say thank you to Illustrator, quit out of it, return to After Effects. And here in the Project panel, double-click and navigate to our Footage folder, where we should find the colorscheme.png file and just open it up. The display here is good enough for us to sample colors. And from time to time if we need it we can grab back color from it.

I'm also going to place it in our Source Files folder just in order to keep things nice and tidy. And now we are ready to create our first explosion or Shatter composition. So let's use this little button to create a new composition. We'll keep the same preset the same dimensions so HTV720. And we'll name this one Shatter01, let's change the duration here to something an little bit longer so, 7 seconds should be plenty of time for what we meet, and say OK.

Now let's open up our Source files. Make sure to highlight the Color Scheme. And now make sure that nothing is selected here in the composition. And of course, nothing should be selected because we don't have any footage. And we'll create a shape that's going to be used as the base for the Shatter Effect. So let's select the Ellipse tool here. And let's just draw an ellipse on the screen. So it doesn't have to something precise, I'm just going to use Spacebar from time to time time to move my shape and maybe end it like so.

And now we are ready to use the Shatter Effect, in order to create our fantasy explosion. So I'm going to trill this, and under Effects and Presets, I'm going to actually go down and open up the Simulation category. Over there, you can find the Shatter Effect. So, I'm going to select it and apply it to the layer. And if you want to know what it does,like every effect in After Effects, you are more than welcome to press on the About button.

And it will tell you that this effect will blow stuff up, what an excellent description. So, let's say OK and see what we can blow using the Shatter Effect. So, first of all let's just change the view from Wire Frame Plus Forces to Rendered. And then just press on the 0 on the num pad in order to create a quick run preview, so you will see what we have by default. And this is exactly match the description. It just blows up the shape that we have to, I guess the wall of bricks.

Let's change a couple of the settings here and I will go one by one and try to explain everything that I'm doing. So I'll open up the Shape, and instead of breaks you can use a lots of prebuilt shapes, you can also use your own custom shape. But for my instance I'm going to choose the Glass one. Let's change the repetitions from 10 to something a little bit more crowded. So I'm going to go with 35. And then, once again, I'm going to create a quick grand preview so you can see the effect itself, right? So nice shattering on the screen. Let's try to control the Physics and try to make it a little bit more appropiate to what we need.

I'm going to park my playhead here so we can see the middle of the explosion and get a sense of the Physics that we are changing. First off, let's change the extrusion depth from 0.2 to maybe 0.1, we don't need this much of excursion at this point. Now let's open up Force number one and change the behavior a little bit. What we actually want to do is to achieve a little bit of a slow-mo Shatter Effect.

And this is controlled by the Depth, Radius and the Strength. And by the way, if you want to see those forces, you can always return to one of the helpful Views here such as Wireframe + Forces. And now we can see a sphere that describes the force that we're actually using. If you want to see it a little bit better, you can go under the Camera position and Rotate the whole thing so you get a sense of what we are actually looking at. Then if we are climbing up, and I'm going to change the Depth and this basically control the depth of the explosion itself.

If you want to cover more, you can change the Radius and more breaks or more glasses will be affected. In our case we don't want to effect neither the Depth or the Radius. I'm going to Undo the two last operation. We only want to affect the Strength. So, I'm going to say maybe 3.8 and once again let's come back to the Rendered view. Go to the beginning and press Spacebar or 0 just in order to see the effect that it render for couple of more seconds. Now we have a nice explosion which we can control of course the force of it. Let's move down and close the things that we already finished with to the Physics and here let's change couple of other settings.

Just in order to really design it the way that we like. First, I'm going to change the randomness to maybe a higher value, so say 0.3. And by the way, these numbers that I'm giving you is kind of trial and error, which I did before recording this lesson. So if you want a different explosion, please feel free to play with it as much as you like. This is a very fun effect and very creative. Okay, so for the Viscosity, we'll use the same value, 0.3.

And this will make them a little bit more tighter. Now, let's leave the Mass Variance as is. But we want to effect the gravity. Instead of pulling those pieces down, we're going to change it, actually, to 0. So, everything will be, basically, blown in our direction and we will be able to see the explosion for much more time. Because the pieces, of course, will just hang there In the air, after the explosion itself is finished.

This is exactly what I like to achieve here. Okay, so now we are down to the Camera Position,and I want to make this a little bit further away from us, so first let's try to change the Z position. And once again I'm going to use something which I know that is going to work for me. So let's say 4.5, and this will take this position or take this object and just move it in the Z position away from us. By the way, you can also use an After Effect build-in comp camera, but for this instance, we're going to stick with the Building Camera of the effect itself. Now, for the X rotation, let's set it up to minus 60, and for the Y rotation, let's set it up to minus 13.

And I think that basically this is the primary design of what we actually want to achieve. Once again I payed with this, and using those numbers I just made sure that it will look like everything is living in the same environment. Which means that the light is coming from above here. And the explosion will look very nice when we will integrate it later with other elements that we're going to build.

For now, this is all we need to do.