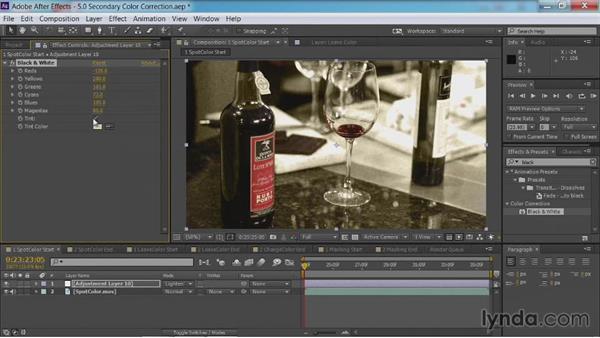 Join Richard Harrington for an in-depth discussion in this video Creating spot colors with the Black & White effect, part of After Effects Guru: Color Grading Footage.

The goal of secondary color correction is to add emphasis to a particular color in the scene. This is where we start to get much more subjective in our grading. Ideally, you can add emphasis or remove all of the other colors but one. Let me show you a couple of techniques with a black and white adjustment layer to start. What I'd like to do here is take this scene and really just add emphasis to the reds in the scene. Essentially removing all of the other colors. To do this, I'm going to take advantage of two effects.

I can remove the red or leave it, in fact, making it really intense. Let's pull the yellows down. And while we're at it, the greens. And note that we can affect different areas of the image. You can also introduce a tint if you want, to sort of give those a little bit of a fill in. So in this case a sepia tone which compliments the red nicely. Let's name that layer. And I'll add one more adjustment layer. And in this case I just want to clean up some of the noise and make this a bit of a stronger contrast.

I like to do that with the Fast Blur. Cranking up the values of the blur while repeating the edge pixel. Putting this into a mode like Soft Light makes it really easy to fill things in. You also may find that a mode like Multiply can work well. Remember, Shift+Plus is a great way to step through those blending modes until you get the look that you're going for. I think that actually looks pretty good in Screen mode there, and we'll just finish this off with an overall contrast adjustment, doing an auto-contrast.

Here we go. Clipping the blacks, and the whites. There we go. And smoothing that out a bit. Lets have a look. You'll see in this case that the strong red is left behind. I filled it in with a bit of a sepia tone for the rest of the colors. And by using the other two adjustment layers, I could really punch the contrast. And add a bit of blooming to the highlights. Let's play that back. Looks great. Let's just rename these.