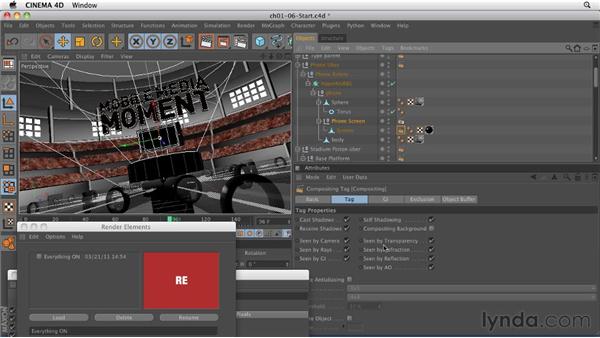 Compositing in After Effects requires the use of layers, and breaking your scene…into layers can be really challenging.…Fortunately, there is an amazing free plug-in for CINEMA 4D that makes that…process really easy and intuitive.…It's called Render Elements, and it was created by a very talented artist and…programmer named Adam Swaab.…Now, before we start the Render Elements process, what I want to do is fix…something in the Render Settings that's very important.…In the previous movie, we were using a test render to test out our movie to make…sure that we had the correct layers.…In order to do that test render, we had changed our range of frames, and I want…to change that back now.…

4/22/2011
CINEMA 4D: Rendering Motion Graphics for After Effects demonstrates how to take a simple logo animation in CINEMA 4D and transform it into a compelling motion graphic with After Effects, incorporating two distinct visual styles. Starting with a prebuilt animation rendered from CINEMA 4D, author Rob Garrott employs industry-standard techniques, utilizing materials, lights, and the library of effects in After Effects, to enhance the project's look and feel. Exercise files accompany the course.
Topics include: