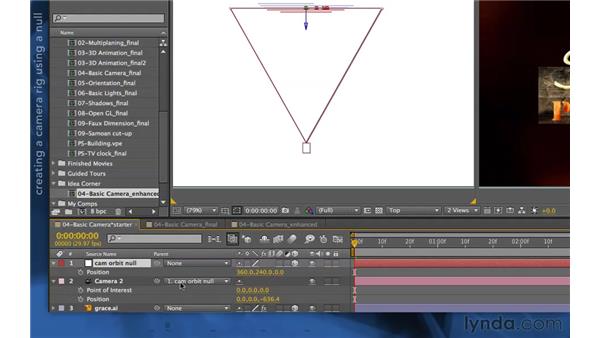 Join Chris Meyer for an in-depth discussion in this video Creating an orbit camera rig, part of After Effects Apprentice: 11 3D Space.

In this last movie we animated our camera so that it orbited around our scene, and I mentioned that one of the problems with using this technique, where you animate the Position of the camera, is that you do need to edit the handles to create a nice curve. In this movie I'll show you how to create a camera that perfectly orbits your scene, and we'll do that by creating a Null Object and Parenting the camera to it. I'll start by tidying up my Timeline. Let's twirl up all our layers. Now, if you like the camera movie you just created, feel free to keep that layer, but I'm going to create a new camera.

I'll go layer>New>Camera, and you can select almost any Preset for this; I'll select the 35 millimeter, and click OK. Now, notice when you have two cameras, the camera on top is the camera that's actually rendering in the Active Camera View, but because we have our View options set to always show us the Wireframes for our cameras, we're seeing both cameras in the orthographic views. So turn of the eyeball for the camera that you don't need. Since I don't actually need this camera, I'm just going to delete it.

Here is the general idea, and there is a different workflow depending on which version of After Effects you're using. For all versions of After Effects we can create the Null Object manually and Parent the camera to the Null. If you're using CS5.5, I'll show you a faster workflow in just a moment, but even if you are using 5.5, it's still worth knowing exactly what's going on underneath the hood. When I'm creating a Camera Rig, I usually like to start with a new camera, and the Point of Interest is centered on my layers.

I'll press P and Shift+A, just so we can look at these values, and that will become important in just a moment. I'll select the layer>New>Null Object, and the default is to create a 2D Null Object, which will appear in the center of every view. Since we want to animate our Null in 3D, the first thing we'll do is turn on the 3D switch for the Null Object. We'll also name our Null Object, Command +Shift+Y will open the Solid settings, and we'll call this cam orbit null, and click OK.

Let's just check one thing, the Position of the Null. It's very important that when we do the Parenting that the Null Object's position is exactly in the same position as the Point of Interest, and a quick check will tell us that it is, and that's why I like to create a brand-new camera when I'm creating a Camera Rig. So the next thing we need to do is then Parent the camera to the Null. Shift+F4 will open the Parenting column, and we can either use the pickwick to select the Null, or you can select it from the pop-up, and after you Parent them, the Point of Interest should say 0, 0, 0, meaning that there is no offset from the Child to the Parent.

Now, I mentioned that if you have CS5.5, there's another way of working, and since I am using CS5.5, let me show you that technique, it's much faster. First I'll create the New>Camera, just like we did before, we can use the same Preset. And then we'll go layer>Camera>Create Orbit Null, and this, again, is new in CS5.5. And that will do exactly what I just did step-by-step a few moments ago. It creates a new Null Object, turns on the 3D switch, and Parents the camera to the Null.

It's a very handy feature, but again, nothing you couldn't do manually in previous versions. And again, I still need to name my camera orbit null. Now, I will mention that one advantage of using CS5.5 is that you don't have to worry about the Point of Interest for the camera and the Position of the Null being the same value. After Effects will do that for you. So if the Point of Interest was in a special place, it will copy that value to the Null Object. So now we have our Orbit Camera Rig built.

I'll select my Null Object and press R to reveal Orientation and Rotation. And the idea is that we only animate the Y Rotation. If I scrub the value, you can see what happens. As the Null Object rotates on the Y axis, in the Top View you can see the camera moving on a nice arc. And just so I can simplify this view, I'm going to hide all the other parameters I'm not using, and I can do that by pressing Option+Shift and clicking on Orientation, X Rotation, and Z Rotation.

Now I can't accidentally edit the wrong value. So to make an animation where my camera perfectly orbits around my scene, I'll turn on the stopwatch for Y Rotation, set my camera to where I need it to be, go a little later in time, and then just swivel it around, so it's looking at the scene from another viewpoint. We'll set the Work Area and RAM Preview. Now you can see that the camera perfectly orbits the scene without getting closer to the layers in the center, the way it was when we were animating the back of the camera, and I also don't have any Motion Path to worry about.

If you'd like to ease into the last keyframe, just select it, and press F9 to apply the Easy Ease Keyframe Assistant. Now, if that's all you need to do, create a simple orbit animation, you're pretty much done, but let's add a few more tricks to your toolbox.