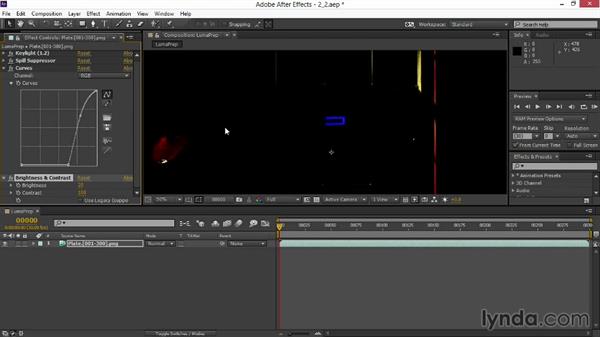 We've added the Keylight effect to remove the green screen from the windows and that's working pretty well. However, we have one major problem, and that's the tape marks that were added to the green screen for motion tracking. This'll be great for motion tracking, but we cannot put anything behind the window until we get rid of those. Now, there are a couple of different ways that we can approach that. We could try to apply another keying tool to target that purplish color, or we can manually rotoscope to subtract those away. A third way, however, is to create a custom Lumo-mask, and use that to cut those away.

Lumo-mask, standing for luminance. Let's try that. What we can do is make a copy of this composition, adjust it, and use that as a mask in the later step. So what I'll do is select the Green Screen Removal comp, go up to Edit > Duplicate, and copy that entire composition. Once it's copied, I'll right-mouse-button-click over its scene and rename it. And I'll call this LumaPrep. I'll close the old composition and open up LumaPrep by double-clicking. You'll see that Plate is in there, along with all the effects that were assigned to it.

All the effects are copied over with their previous settings. That's okay, I'm going to keep Key-light and Spill Suppressor and add a few additional effects. Now the goal here with this new composition, is to create a very high-contrast version that isolates the tape marks. If they're isolated we can turn those into a mask and therefore remove them at a later step. Let's play this back so we can see where the tape marks are first. Now there's more than one. There's one, two, three, four, and a fifth one at the end.

So I'll have to keep that in mind, there's five different tape marks. In any case, to create a high contrast version I can apply a few additional effects here. Let's start with the Curves Effect. I'll go to Effect > Color Correction > Curves. Curves Effect is a great way to interactively adjust the contrast. You get this default diagonal line, however you can click on it, at additional points and then drag those points around. For example, if I make a really intensely sharp transition here, like this, and place the second point up here, to get this type of shape, you'll see the contrast is much more intense.

In fact, most of the foreground has gone to black. I can definitely see a tape mark and then may a few other bits and pieces like the edge of the window and the actresses neck. And I would like to really isolate the tape marks and try to get rid of everything else. I can try an additional effect, for example, Brightness and Contrast to increase the contrast further. So Effect > Color Correction > Brightness and Contrast. Here I'll increase the Brightness a bit first, say, 20. And then ramp the Contrast up to its maximum, 100. So a little bit more Contrast.

Now, it's still not perfect. I still see some of the window parts and part of the actress. I would really like to get the tape marks by themselves. So here I can apply some loose rotoscoping. Now I know we originally discussed possibly rotoscoping the tape to get rid of it. However, with that type of rotoscoping would have to be more accurate. What I can do here is create a looser, more sloppy rotoscoping, and simply to pare down this shot to just tape marks. So it doesn't have to be as accurate. Now, one quick way to do that is to go back to the first frame, go up to the Rectangle tool, click that, and this will create a rectangular mask that's closed automatically.

So with that selected I can click-drag inside the viewer and create a loose rectangular mask. Now this ought to be animated over time, so I can go down to New Mask one, expand that, and click on the time icon beside mask path. That will remember the shape of the mask of that particular frame. Then I can move on to another frame, say every 25 frames or so, and then move this over. To move it as a single unit I can go back to my Selection tool, the arrow, double-click on that mask until I see the transform handle, then simply, click-drag it over.

And then go over another 25 frames and repeat the process. Be sure you're moving the mask itself and not the background. In order words, don't move the Plate, you just want to move the mask. Now, eventually some of these tape marks will disappear behind the walls, and in fact, I'm going to need more than one of these mask to follow all different tape marks. So one trick here is to change the mask status from Add, to None. You'll still be able to see the mask, but it's not working. That way you can see through it to the entire Plate, and determine where all the tape is.

Once you're done with the rotoscoping you can turn the mask back to Add. You have to go through the entire timeline and try to surround every single tape mark. For example, let's say that I finished the animation for the first tape mark. I can make another mask for the next one, I go back up to the Rectangle tool, and draw a rectangular mask over the second one. Again, in order to see through this, I can see everything at once, I can temporarily turn this to None. And there's Mask two right here.

Each mask you draw will have to be animated so as you create them, go ahead and turn on the time icon for mask path. So again, the goal here is to surround each of the tape marks with its own mask box, and animate those so they follow the entire duration of the timeline. Once you're finished, you can change all of the mask status menus back to Add, and when you're done you will have all the tape marks by themselves. Even though I've just started, you can see that all the foreground is now missing, and I'm down to just tape marks.

This is going to take a few minutes. I'm not going to be able to demonstrate this in real time, so what I'll do is I'll come back and show you the final result of my animation. In the meantime, go ahead and work on the masks yourself.