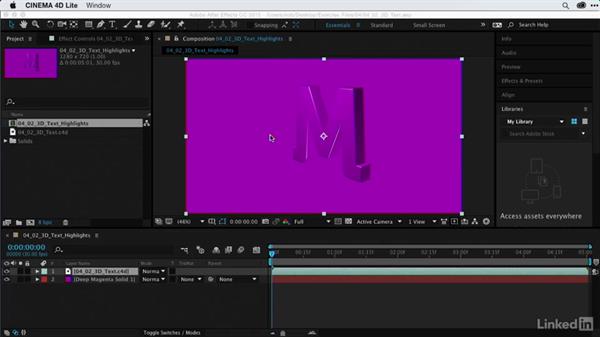 So once you have the project open, you should note that we have one composition, and if we look in the timeline, it has a Cinema 4D Lite layer, and it has a background magenta solid. So let's select Layer One and press Command + E on the Mac, or Control + E on Windows to Edit the original file. If you have a full version of Cinema 4D, the full version probably launched. If you don't, Cinema 4D Lite would launch. Now, since this isn't primarily a Cinema 4D course, I'm starting with text that's already been extruded, but for those of you that may not be familiar with this, I'll just kinda break down the project.

Notice it has it for the front and the back of the letter. This is important because that's what gives this edge that is catching the highlight. So I created a material and added it to the extrude object just by dragging it and dropping it. Let's double-click on the Material, so we can see what it looks like. It's just a generic material that has a Color channel, that's this kind of purple-magenta color, and a Reflectance channel. And if you click on the Default Specular settings under the Reflectance channel, I made the width a little more narrow, and I increased the Specular Strength up to about 80.

So when we Close that Material Editor here, that's what's giving these nice highlights. Now the highlights are also being created from these two different lights, so one light is 73% bright, and it's kinda down over here to the side, and then I have another light that's sorta up over here okay? So I have two lights, and if we Scrub in the timeline here, you'll see my letter is rotating around, and as the letter rotates around, you can see that specularity is reflecting each one of those lights, and that's catching on the edges here.

So in order to accentuate the edges and create a really strong highlight glow, I wanna go ahead and adjust one of the settings in Cinema 4D Lite, and that's under my Render settings. So if we click this Edit Render Settings button here, I just went to Anti-Aliasing, and I set the filter to Animation, and the Anti-Aliasing to Best, that's it. So I can go ahead and Close this. If you've just been following along, you don't have to save this at all, I'm just gonna click on Cinema 4D Lite and say Quit, and I don't need to save it.

Okay, so back inside of After Effects, if we Scrub, you can see I've got my letter rotating. Now, select Layer One, and if we go to the Effect Controls Panel here, you'll notice I have Cineware, and this controls the exchange of information between Cinema 4D and After Effects. The Renderer has been set to the Final settings, which is what's giving me a nice clean look to my letter here. Now I want to accentuate these highlights. And the way I'm gonna do that is by using what's called a Multi-Pass Layer.

So I'm going to select Layer One, and press Command + D, or Control + D on Windows, to Duplicate that layer. With Layer One, the Top-most Layer selected, go ahead and click on that. We'll go back up under Cineware here, and I wanna go ahead and Enable Multi-Pass by selecting it here, and I'll Set a Multi-Pass Layer. And when you click on that Set Multi-Pass button, you want to change it to Specular. So when I click Okay, now I have two specular channels, I have the specularity of this layer, and I have the specularity of the layer below.

But you can't really see the layer below, because when I enabled specularity, it just created the highlights, but it also changed the material black. So I need to change my Blend mode from Normal to Add. And now if I Toggle Layer One Off and On, you can see I've accentuated those highlights. Now, I could add more accentuation to this by going up under Layer or Effect, and I could go to Stylize and choose Glow, and if I decrease the glow threshold here, notice it is applying the glow over top of my Cinema layer, and now we have a beautiful, nice, shiny glow that I've accentuated in Post just by isolating this one layer by itself in my Cineware settings.

Now, if we wanna add a little bit more dimension to this, I could go ahead and create a duplicate of this layer, so I'm gonna select Layer One, and press Command or Control + D to Duplicate. And I'll go up under Layer, and I'll choose Pre-compose. And I wanna move everything to the new pre-comp, and I'll call this Depth, and click Okay. And again, we'll change the Blend mode back to Add, and I'll press S to Open the Scale, and I wanna scale up this layer so it's much larger in the background.

And so now, not only do I have kind of an interesting dimension that's added with the glow off the letter, I've added a little more depth with this extra depth layer. And notice if I click on this layer and drag it just above layer four, it respects the layer hierarchy between my Cinema 4D layers. So now we've added just a little bit more dimension into the scene, and if I really wanted to be tricky, I could maybe retime this layer so it plays backwards, and it spins in an opposite direction, but I think you get the general idea.

Whenever you wanna accentuate or highlight the edges of 3D objects in Cineware, you can go ahead and pull out just the specular highlights, and isolate that, again inside of Cineware. If you have a full version of Cinema 4D, you can render out this pass at whatever resolution you prefer, and not go through Cineware. But as you can see, with the free Cinema 4D Lite module that comes bundled with After Effects, you have a ton of flexibility when it comes to working with different render passes through Cineware.