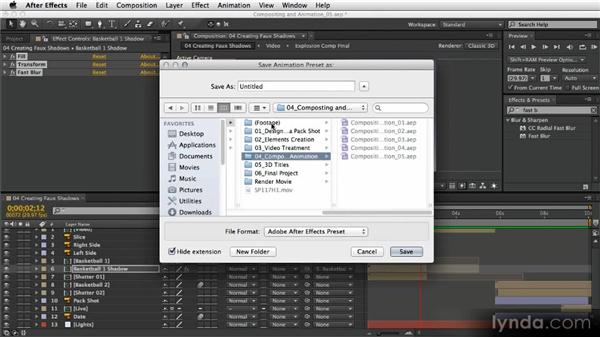 Our composition is starting to shape itself into its final state, however, there are a couple things missing. I want to play this for you once again. (music playing) And you probably notice that it looks like everything is happening in mid-air. What will really help to sell the illusion that we are actually in some kind of a 3D Space, 3D World is if we add some kind of shadows.

This is a workaround which I rely on heavily when compositing 2D and 3D elements just in order to create some atmosphere to the shot. Now, I'm working inside compositingananimation_05, which is a continuing After Effect project that you can find inside the fourth folder of the PhotoGen project files. We're actually going to use each one of the layers that needs to cast a shadow as a duplicate of its own, meaning that we will for example grab the basketball layer here and duplicate a copy of it out immediately.

I'm going to rename this one Basketball 1 Shadow, so I know what it does. I'm going to also make myself a little bit more room to work here. And then, right-click here and enable the Parent column. So after creating this duplicate, the first thing that I like to do is Parent it to the upper layer. And this way, if I need to change anything later on, I only have to worry about the basketball itself.

So now, let's fit the composition to the new window, so we can see all the border around. And then, I'm going to actually apply three effects to this basketball Duplicate layer. So, I'm going to make myself a little bit more room by closing the Info and the Audio panels. And then, under the Effects and Presets, I'm going to look for the Feel effect, double-click to apply it, and then I'm going to immediately apply another effect. This one will be the Transform effect, so double-click to apply it after the Feel effect, and then I'm going to type fast b in order to find the Fast Blur effect and double-click it to apply this one. The first step will be to change the color of the fill effect to black. So if we're going to take a look at what we have underneath our basketball, we have another basketball, this time filled with black. And now, let's work with the transform properties to place this effect underneath our basketball.

So, I'm going to dismiss this Uniform scale and change this value to eight. And I'm going to just drag the position of it, and basically place it where I think it should land. So, something here, underneath on the floor, maybe like this. Now of course, you can do it with the Transform of the layer itself. I mean you can open it here, and then under the Transform, you can play with it. But since we already have keyframes, I don't want to mess with the animation in place.

I also want to save it as an Animation Preset for later use instead of creating this effect over and over again. So, using the Transform effect, will actually give us all those things. So, let's go down and change the opacity to say 50% to begin with and we'll create a Soft Shadow here by raising the blurriness amount to maybe 40. And if we are going to take a look here, we can see that the shadow is actually moving with the basketball.

And it really helps to sell the idea that there is some kind of a definition here. Now I may want to pull it a little bit down, because I don't want it to interfere or to mix with the explosion itself. So this is something that you have to work on just until you get a satisfying result. Once you're happy with the result, we can collapse all the three effects here, and then, I'm going to grab all three and release them on top of the Effects and Presets panel. This will promote you with the opportunity to save these effects all three as an animation preset.

It will also probably going to point you to the User Presets folder on your hard drive. But since I want to share this effect with you, I'm actually going to save it inside our Footage folder, and you can see that I already have this effect for you. So, let's just replace it. I'm going to name this one Shadow Preset. And I'm going to replace it. Now, you may get this warning that After Effects is going to throw at you, saying that, when you're saving an Animation Effect outside the Default folder, it will not be visible next time you launch the software. So, under the Effects and Presets, you will not be able to see. So this is up to you, but once again, I just want to share this effect with you. I'm going to say okay for this.

And of course, we will be able to call it once again, because it will wait for you under the Animation menu here under the Recent Animation presets. So, this is what we just saved, and we just need to reuse it in this composition in this project, but of course you should save it in the user reset folder. Okay, so, let's see how this actually works. We're going to take the same steps once again. So, select the shutter zero, one and then press Command or Ctrl+D in order to duplicate it. Once again, I'm going to immediately rename this one Shadow 1 Shadow. And then, I'm going to parent it to the Shadow 1, the layer above it. And then, while it's still selected, I'm going to go to the Animation menu. And then, under Recent Animation presets, you can apply the recent preset that we just saved.

And now, you probably need to go to the Transform effect and just play with the position. So, it will be visible at the place that you want it to be, so maybe something like this. You can also play with the scale width. So, I may want to reduce the scale width to maybe 90. And also, let's go down and maybe raise the opacity, just a touch. Of course, you can change your mind later on or you can animate those properties just to give you the desired result, but this is a good starting point.

And we do see indeed that when we have this, it actually helps to sell the idea that we have some kind of a definition. Think that we might want to go with the opacity all the way to a 100% and maybe go back to the basketball shot over here. And in this case, maybe even lower it a little bit. So I have a nice mix between those two. And see how much this contributes to the whole atmosphere. So at this stage, what I'm going to do now is basically create the same shadows for the other layers that I have in the pack shot. Meaning, for the basketball, for the exposure, the light, and the the date, then I will fast forward the recording and show you the outcome. So after applying the same preset and modify it a little bit, we get this result where we have shadows underneath our object here. This is the first scene, and then, you can see that we also have shadows coming from above the basketball and the explosion, and also underneath the date. And of course for the live action, all of the shadows are done using the same technique.

And now, the last step that I recommend, this is just a cosmetic thing, which probably will help you if you want to return to this composition and make some changes. So, at first glimpse, you will see a lot of layers. So, let's just try to get rid of some of the visual noise. By that, I mean to select all the layers that has shadows. And I'm going to select the first one, then hold down Command on Mac and Ctrl on PC, select the other one and this one as well.

Also, this one has a shadow and this one as well. And I think that we have also the (UNKNOWN) one. So, all those layers with a shadow underneath, I want to color them differently so I'll get a sense immediately that this is a Shadow Layer. You can do it easily by going to the Edit menu, and under Label, I'm just going to select None, because None will have basically a gray color and for me this is the closest one that relates to shadows. So once again, this is an optional step.

You don't have to do it. It's just something which I found very useful. Let's bring back the screen to 50% so we can see it a little bit better and let's go to the beginning. And once again, create another RAM preview just to see where we are now. (music playing) And I think that those shadows really helps to add more definition and depth to the whole scene.