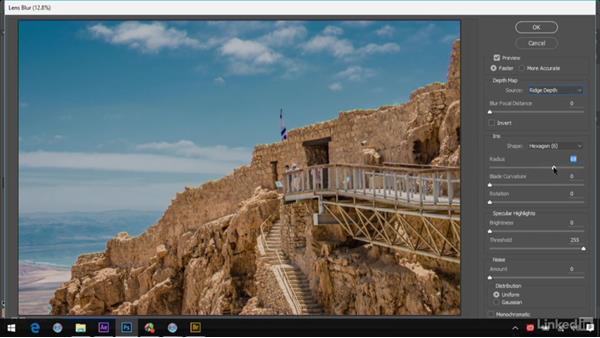 - Whether you're looking to create a background plate for keying, or perhaps make just an image that's simplified, Photoshop has a wealth of blur tools. Now in the old days, you might just toss on a Gaussian filter and call it good, but now, we can take a lot more control. Let's explore some of the options. I'll choose File, Browse, and Go to Bridge, and we're going to take a look at the camera lens blur effect.

Let's start here, with something pretty straightforward. Now I've already got a .raw file here, as well as a .psd document, open up the .psd, unless you want practice developing a .raw file. To make things easier, I've already applied and created an alpha channel, we'll talk about that in a moment, but first, let's just run the camera lens blur. I'm going to duplicate this layer, right click, Duplicate Layer, we'll call it Blurred.

Now, Filter, Blur, Lens Blur. This is very similar to the camera lens blur in After Effects. And by default, adjusting the radius will simply start to blur the image. You'll see the ability here to play with the overall image itself, and get a softer image. As you increase the radius, you'll see more parts of the image start to blur out, like you see here. You can also play with the Brightness slider, and lower the Threshold so elements that are relatively bright start to bloom, like you see here.

Now that's little bit too low of a Threshold, but it's not unnatural for bright highlights to start to get a little bit glowy when you rack focus. I like that, but let's take more control. Under the Source menu here, you can actually use an alpha channel. Let me click cancel for a second, I've already created these, so you'll see the first thing I did, was create a basic selection with the Quick Selection tool, and then I used the Refine Edge command, and made that into it's own alpha channel called Ridge.

An alpha channel is just a saved selection. That could be done if you have an active selection, by simply clicking on the Channel button, to save that. So any selection tool can be used to make an alpha channel. What I then did, after creating that alpha channel, is simply selected it, and used the Gradient tool here, to add a black to white gradient. So we had a gradual transition of what was in focus and what was out of focus.

Alright, let's throw that second copy away. Now, what we can do is invoke the camera lens blur effect, Filter, Blur, Lens Blur. And from the pop up dialogue here, I'm going to select to use the Depth Matte, Ridge Depth. Now I'll increase the radius here, and what you're going to notice is that the foreground is going to blur first, because the white areas are more heavily blurred, while the black areas are being ignored.

Now I can easily invert that if I want, and now, the blur is getting pushed back, the sky has gone a little bit softer, the rocks that are further away fall off, while the building stays in place, which works quite well. Let's click cancel for a second, and we're going to combine those. So I'll simply Ctrl + Click to load this as a selection, and take a look here at this alpha channel, and I'm just going to press Ctrl + I to invert it.

So now the sky is going to be not blurred, the foreground is going to be not blurred, but the rocks that are further away are blurred. Let's save that, there we go. And we'll choose the RGB channels, and simply invoke Filter, Blur, Lens Blur. And now, as we adjust the radius here, you'll see that the foreground stays in focus, while the background starts to fall out of focus, provided that we use the Depth Matte, Ridge Depth.

This means that the front elements are nice and crisp, while the background starts to fall off. You'll notice that you can play with other things, like the blur focus distance to refine that a little bit. You can have it make this highlights bloom, as we explored later, or play with the overall curvature of the blades to affect the amount and shape of the blur. I would also recommend putting in a small amount of noise, by adding a little bit of noise in there, your blurred areas will still look natural.

If we zoom in here, and take a look at the noise, you see that we can dial that in. Let's go with a noise value of about five, there we go. And now the out of focus areas still have grain and texture, like the in focus areas. So this is a great way to be very specific about which areas stay in focus and which don't. If this was a locked off footage file, we could even use that Depth Matte over inside of After Effects with a comparable camera lens blur effect.

When I click OK, this new lens blur is going to be applied. It's a relatively fast effect, and let's do a quick comparison there, between the before and after. Here's my before state, and my after state, where I had some of the background elements fall out of focus. Remember, when shooting in bright sunlight, like I did here at this fort, what happened was that I had to use a very small aperture to control the light, as such, the entire wall was in focus, but I'd like that to fall out of focus.

So the camera lens blur effect is a great way to simulate focus effects, and take advantage of alpha channels to actually function as a depth matte. Remember, black can be ignored, while white is more heavily focused, or de-focused, in this case, and we did a nice gradual blend between the two states.

10/18/2016
After Effects has a powerful toolset, but there are some things Photoshop just excels at. Namely, manipulating raw images, color, and perspective. If you're a Creative Cloud subscriber, you have access to the entire suite of applications. So why not take advantage of both toolsets? In this course, Rich Harrington shows video professionals how to fully integrate Photoshop into a variety of After Effects workflows, including repairing images and building new assets for motion graphics and video effects.

Learn how to properly develop and then optimize raw files to increase performance in After Effects, and use Photoshop's advanced typographic controls. Find out how to use layer styles to add bevels, overlays, and glows, and correct lens distortion, chromatic aberration, and vignetting. Rich also introduces a unique use for Vanishing Point, which allows you to export 3D objects for parallax movements and virtual sets. Plus, discover how to save out depth mattes for backdrops and keying, and use the powerful Content-Aware tools for background plates, set extensions, or recomposing assets. There's a lot to learn! Start watching to incorporate Photoshop's advanced tools into your next After Effects project.
Topics include: