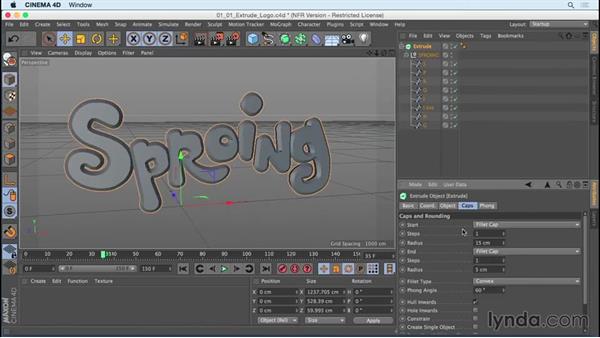 - In this course, we're going to be creating…a 3D cartoonish logo and animate it…in a fun, bouncy way.…To begin, you'll first need to design a flat logo…that looks really playful and rounded…and import it into Cinema 4D.…So I created this logo here in Illustrator…and imported it into Cinema 4D.…And you can find out more on how to…import Illustrator paths into Cinema 4D…by watching, "Creating Flying Logos…"with After Effects and Cinema 4D Lite"…with Chris Meyer.…Alternatively, you can just create the logo completely…inside of Cinema 4D using its spline tools.…

So first thing's first,…we actually need to take these logo splines…and extrude them so we actually have…some 3D geometry to work with here.…So to do this, we're going to bring in…our trusty extrude object…and just place all of our objects underneath it.…Now to actually have our Extrude affect everything below it,…you need to check on this Hierarchical button.…Just check that on right here.…And you can see that that 3D-ified our text.…So then what I'm going to do…