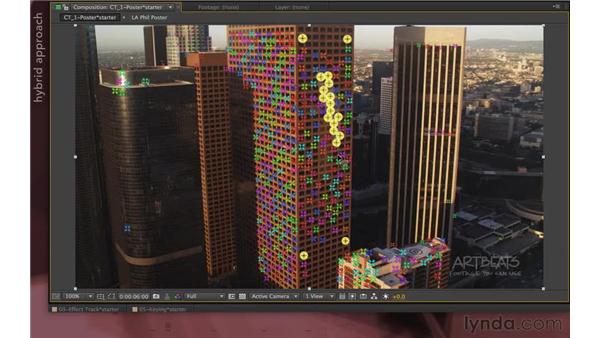 Now that After Effects has finished tracking and solving this scene, …I've decided I want to put the poster on this side of the building.…So I'm going to move my time indicator to a point where I had the clearest…view of that surface.…There's a few different ways to define what point in the 3D space you want to…put your new layer to composite into the scene.…One is just by moving the cursor over the Composition Panel while the …3D Camera Tracker is selected.…If the Camera Tracker is not selected, your Track Points disappear.…When it is selected, you get to see them and you get some interactive help …in placing your points.…

You need a minimum of three points to define a plane that After Effects …will then place your new object on.…As you drag your cursor between points, After Effects will automatically…triangulate the three closest points and suggest those as possible places to create a plane.…As you do so, look at the orientation of this bull's eye compared to …the perspective of this actual scene.…