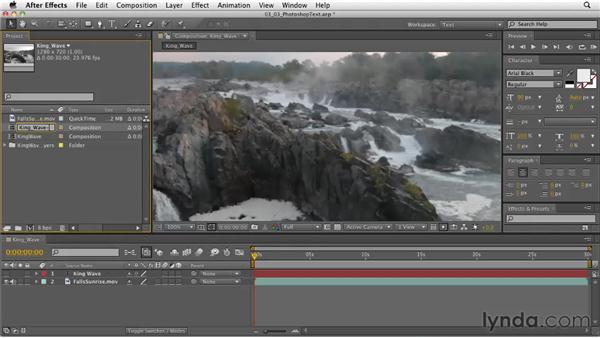 Join Ian Robinson for an in-depth discussion in this video Converting type from Photoshop, part of After Effects: Principles of Motion Graphics (2011).

As I mentioned a little earlier in this course, you should go outside and shoot some footage. Here, you can see the start of a graphic that I created in Photoshop with elements that I shot with my digital camera. As you continue to build your portfolio and personal library of smaller elements, you will probably end up with a fair amount of them in other applications like Photoshop or Illustrator. And actually, you'll find many more graphic elements that I shot with my digital camera in the exercise files that accompanied this training. I mention this because usually I find it's a little quicker to work with elements in Photoshop just when I am noodling around, and then I really only move to After Effects once I have decided on a specific direction.

So what happens if you create something in Photoshop you really like? Do you have to re-create everything back in After Effects to maintain maximum flexibility? Well, I'm sure we all know that the short answer is no. So in this example, you can see that in my graphic I've created some type, and I applied some layer styles to it. If we go ahead and open up the layer styles, you'll see I've added a drop shadow and a gradient overlay. Now, one of the nice things is the fact that I could actually import this right into After Effects, and not only import the layer styles, but I could also keep the text as editable so I can make changes to the type within After Effects.

So let's go ahead and check that out. I am just going to Command+Tab to jump back over to After Effects. And here you can see we have the comp that I'd worked with in the last video. So what I will do is just turn off this King Wave text layer, and we will import our Photoshop document by double -clicking in the Project panel. Navigate to your Psd-Comps folder, and in there you should find KingWave.psd. Now, make sure you import the file as Composition - Retain Layer Sizes.

This way when we import it, each individual layer will have its anchor point and bounding box sized specifically around each individual layer, as opposed to the entire composition size. So make sure Photoshop Sequence is not selected and choose Open. The next pop-up you will notice, we have Import Kind, Composition - Retain Layer Sizes, which is exactly what we just selected. But here, under Layer Options, you want to make sure Editable Layer Styles is selected. Now, we can leave Live Photoshop 3D selected.

We don't have any 3D elements, but I usually just leave that selected and press OK. Now a lot of times as I'm working in projects, I will have instances like this, where I will have two comps named kind of the same thing. So what I like to do to fix this is select the composition that I'm going to actually render out of and add some type to the end of it. So select King_Wave, press Return on your keyboard so we can rename it. I am just going to press my right arrow to move my cursor to the end and choose -OUT.

Now, this way I know that that's what I'm actually going to render out. Let me go ahead and open that up, so you can see the full name of the comp. Okay, so to look at our Photoshop document, let's double-click KingWave. Now, in here, you notice we have WAVE, and KING, and they both have layer styles on here. But as you can see, I can't actually edit the layer styles. Now we did select Editable Layer Styles. Sometimes this happens where you can't see the actual editable layer styles. So if this happens to you, all you have to do is just Ctrl+Click or right-click right on the layer, go up to Layer Styles and choose Remove All, and I know that removed everything.

But now if you just press Command+Z or Ctrl+Z to undo, you will notice once I've undone the Remove All command, now I actually have my drop shadow and my gradient overlay as completely separate editable elements. So let's do the same thing for the WAVE layer. Again, I will just right-click on it, go to Layer Styles, choose Remove All, and then just undo that command using Command+Z or Ctrl+Z. We've got our full flexibility back into our Photoshop document with our layer styles. Okay? I can go into each individual style and make adjustments. But what if I actually want to change the Type itself? Well one of the cool things in After Effects is the fact that you can actually convert Photoshop layers that were originally type back into type layers within After Effects.

To do that, just select the layer, go up under Layer, and go down to the bottom, and you'll see Convert to Editable Text. When we go ahead and choose this, watch what happens to the layer. Now, you notice I have the T key, and I can actually now go ahead and edit this type. So if I want to edit this type, what I need to do is grab my Type tool by pressing Command+T, and then clicking within the layer itself. Now the type that I have actually converted is WAVE, so if I go ahead and click between the letters for WAVE, now you notice I can actually move my cursor and using those key commands, Option or Alt and arrow, I can re-kern this. Or if I wanted to add other letters, I could go ahead and just type any other letters, and actually make edits to the type itself.

Now, I'm just going to press Enter on the keypad to set that. So again to make your type editable, if it used to be type from Photoshop, all you have to do is select the individual layer, go open under Layer and choose Convert to Editable Text. Now, while making type editable may not seem like a big deal as you watch this, understand that this is just one of those really nice features that makes things that much easier when attempting to utilize a workflow across both Photoshop and After Effects.

2/9/2011
After Effects: Principles of Motion Graphics with Ian Robinson covers some of the core principles used to create motion graphics, breaking them down into smaller groups of applied techniques in After Effects. The course explores everything from gathering inspiration to integrating traditional typography, transitional elements, animated textures, color, and more into motion graphics. Instructions for building a toolkit with templates and a style guide for future projects are also included. Exercise files accompany the course.
Topics include: