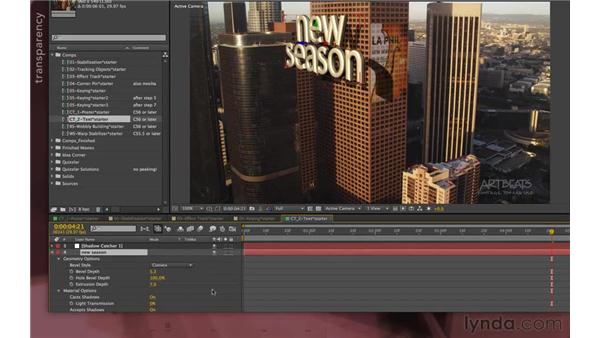 Here's a scene I created using the 3D Camera Tracker to place a poster on the side of a building and text floating out in front of the building with shadows cast onto that building. Again, remember that this background plate is just a 2D plate. We're faking the 3D geometry using the camera that the 3D Camera Tracker created. Well, this is kind of a fun scene but you know, to really sell dimensionality and realism, I really wish that this text was say, extruded and beveled. Well, as of After Effects CS6 I can do that using the new Ray-traced 3D Renderer.

However, using it comes with some trade-offs. So let's go through the process of converting a composition from using the Classic 3D Renderer to using the Ray-traced Renderer. I'll click on the Classic 3D button, which takes me straight to the Events panel in the Composition settings, and I'll change the pop up to Ray-traced 3D, and click OK. Doing so changes the appearance of the text since it's now Ray-traced rather than using the Classic Renderer, and also causes some issues with our poster. One of the biggest problems is that Blending Modes are not supported by the Ray-traced Renderer.

If I change over to the Modes column, you'll see that Modes aren't even an option for these layers. So the first thing I'm going to fix is going back down just one layer of the poster and having to get by with just using Normal Mode, no Blending Mode to further blend it in to the side of the building. So I'm going to go ahead and use a reduced opacity and it doesn't quite interact as well as it used to but it seems an acceptable compromise because we're about to make this text look a lot better.

I will twirl up some other layers just to clean up my Timeline panel. And here's my text. I'll type AA to reveal 3D parameters and now I have Geometry options -- Extrusion and Beveling. All this was discussed in great detail in an earlier After Effects lesson but we'll go through some of this quickly. First thing I want to do is Extrude my text. And now it's got some actual depth and dimension to it. The second thing I want to do is Bevel it. Angular is a common filed-off edge. Concave creates a scooped-in bevel that I personally like.

But I think I am going to create sort of a glass neon sort of look for this title. So I'm going to go for Convex, which rounds the corners of the text. I'm going to increase the Bevel Depth and reduce the Extrusion Depth to make my text small again, but I can't really see what's going on. Because by default, After Effects will take my stroke color for my text and apply that to the bevels of extruded text. In this case, since I'm going to go for sort of a glass look, I don't need that separate color.

So I'm going to disable my Stroke color and now it will take on the type's Normal Fill color. That's better. I think I'm going to go ahead and give it a little bit more space in here because Bevels increase the size of your objects and I might even try a thinner weight of this font because again, bevels fatten it up so I'll start with a thinner base. Now I can go a little bit larger, maybe track it out a little bit, to let it breathe a little bit.

That's getting better. Now I can go ahead and increase my Bevel and decrease my Extrusion to create more of that rounded look I was going for. Looks like my larger type is extending further downside of this building, so I'll take my first Shadow Catcher and just lower it down the side of this building to catch that entire shadow. Okay, let's make this text translucent. To do so, I just need to increase its Transparency parameter. And now we're starting to get something that looks a little bit more cool bit more stylized, like there's a and a big glass sign hanging in 3D space.

To add a little bit more definition I sometimes increase Transparency Rolloff just so the sides that are at an angle to the camera aren't as transparent and draw a little bit better defined. Index of refraction will increase the glass look. Unfortunately, my Background layer is a 2D Layer so it will not be refracted through this 3D text; 2D and 3D layers do not interact. However, increasing it, it still changes how light rays bounce around inside the text itself and the back sides and back bevels will still get displaced when viewed through the text.

Roughly 1.5 is a good number for glass, that's what I'll go for. Text is looking a bit bright, so I think I'm going to tighten up on my Specular highlights by increasing the Shininess parameter. Oh, that's getting nicer. I like that. Looking a little bit dull I could increase my light's intensity or we can just try increasing the Diffuse value initially. There we go now it's reacting more strongly to the light. This is starting to look a little bit more cool, I like this. This is a nicer look than just a flat text.

It was worth the trade-off of losing the Blending Mode on the poster on the side. Now throughout this scene, the sun and reflections are traveling across this building. That helps sell the realism of the shot. However, I don't have any reflections traveling across my text. So if I want to better integrate it into the scene, I need to come up with some sort of environment map that will reflect onto the text and give it more of a sense of movement as the camera moves. Since I don't expect to see a very sharp reflection, I'm just looking for movements and patterns of light, I'm going to cheat.

I'm going to take my Background plate, duplicate it, select the Duplicate, change it to be and Environments Layer, which now means it wraps completely around the scene and most importantly, makes it available for reflections. So I'll go back to my text and start increasing the reflection intensity until it starts to appear in my text. Now After Effects uses what's referred to as Energy Conserving Shader. The more I increase reflection the less the Diffuse value is calculated in.

So I can increase the Diffuse value to compensate and make my text nice and bright again. Now as I go through the scene, I'll start to get a little bit of light and reflections traveling across my text, making things a bit more realistic. Also noticing that my text is a bit on the noisy side; I see little dot patterns in it. That can be cured by increasing the Ray-traced quality, so I'm going to Cmd+Click or Ctrl + Click on my Ray-tracer button and increase the number of rays to higher value such as say -- well, 10 is really high, I might even be able to get away with just 5 or 6 -- and after it takes a while to render this frame, now I have a much cleaner-looking text.

If you want to see what that looks like as a final without waiting for me to render this, I'll go into Idea Corner and open up Camera Tracker Ray-traced Text final (CT_2-Ray-traced Text_final.mov) and let's preview that. And this is a slightly different version I created earlier with a little different color for the text, but now you get to see the translucency, you can see the reflections traveling across the face of the text because I set up a copy of the background as my Environment Layer, there is my Shadows. Pretty cool-looking scene and you can do it completely inside After Effects CS6.