Cleaning up the stabilization 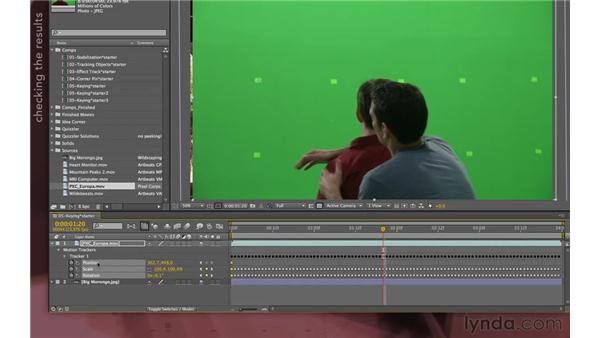 Join Chris Meyer for an in-depth discussion in this video Cleaning up the stabilization, part of After Effects Apprentice: 12 Tracking and Keying.

I performed a successful track of these two tracking dots on my green screen set…including dealing with the actor moving in front of one of those dots.…What I need to do now is clean up the bad information in the track and also…apply to this footage.…The standard After Effects Tracker saves all this information as keyframes on the layer.…So I'll press U to reveal these keyframes and there is Track Point 1, the one on…the left and Track Point 2, a tricky guy in the right.…As I scroll down I'll even see a gap here where it loses the plot during this track.…

Now the Feature Center is what After Effects determined while I was looking…around during the track.…What I'm most interested in is the Attach Point, because that's what's going to…be used to derive the Position, Scale, and Rotation information.…I need to carefully step through here and see if there's any bad information for…that Attach Point, that little plus symbol right there in the middle, and delete…the bad information.…So I come through here.…

Video: Cleaning up the stabilization