Channel modes and other settings 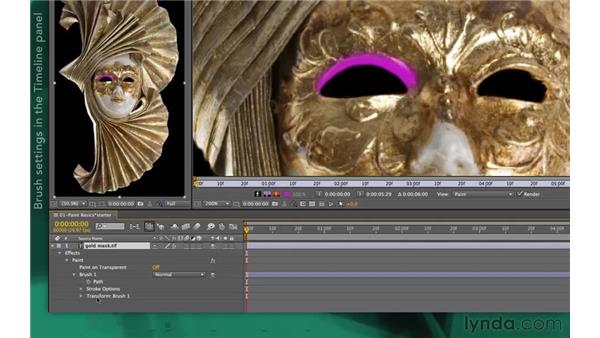 In this movie, we'll cover some options for the Channels pop-up and the Modes…pop-up by adding some colorful eyeshadow to the mask's eyes.…I'll start by setting up my workspace.…First I'll remove the paint effect that will delete all the strokes I've created…in the previous movie.…I'll press the semicolon (;)…shortcut and that will zoom all the way out. You may have to that twice…depending on where you're at. Then I'll double-click the work area to reset the…work area to the entire length of the composition.…I'll also want to zoom in on these eyes.…

The Selection tool is currently active so I'll press and hold down the Z key and…that will give me the Zoom tool.…I'll click a few times to zoom in and when I release the Z key, it will return…to the last tool that I was using.…Then I can press the Spacebar to pan around and center, and you can even zoom in…a little further just so we can see what we're doing.…I'll select the Brush tool as before and let's check a couple of our…settings over here.…

Video: Channel modes and other settings