Casting shadows on layers in CINEWARE 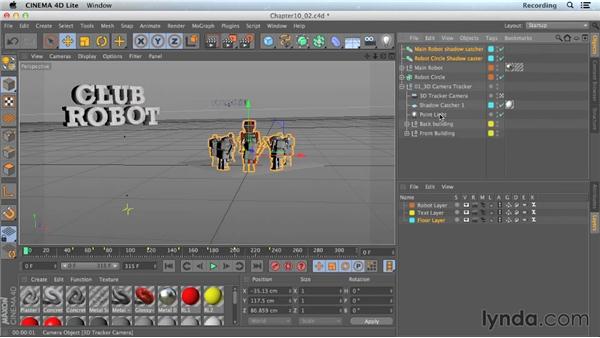 Join Angie Taylor for an in-depth discussion in this video Casting shadows on layers in CINEWARE, part of Learning Cinema 4D Lite for After Effects.

- We're going to have a look at how we can cast shadows from one layer to another using CINEWARE. You'll notice that in this composition, which is within chapter 10 03R16AEP that we have the robots standing on top of the building but the shadows aren't being cast from the robots onto the building and that's for a very good reason. If I select the floor layer and hit command D to open up the project in CINEMA 4D Lite you'll see that the floor, text, and robots are all on separate layers, which is great because it means I can isolate elements, but in CINEWARE the thing that's casting the shadow has to be on the same layer that the shadow is being cast onto.

So in other words, because my robots are on a separate layer from the floor layer, we're not getting the shadows being cast. Now there is a workaround for this and that's what I'm going to show you now. What we're going to do is open up my robots now up here in the objects manager and I'm going to select the main robot, which is this big robot in the middle. What I'm going to do is make an instance of that robot. So an instance is kind of like a clone of that robot that we're going to use as a shadow caster.

Okay, now once we've created that instance I like to go to the attributes and say render instance. That's just going to speed up rendering a little bit. Then we're also going to go back down here to my robots now and choose the array, which is the circle of robots. I created that using an array and I'm going to make an instance of that. So we've got the array instance. Again, I'm going to say render instance just to keep things fast. So I'm now going to select both of these and I'm going to add them to the floor layer, okay? Now if we save the project and then jump back to after effects, you should see that we're now getting the shadows being cast onto the floor, which is great.

Now the only thing is if I solo this layer in after effects by clicking the solo button here, you'll see that not only do I have the shadows being cast onto the layer, but I can also see all of those elements as well, which is not what I want. If you jump back to CINEMA 4D, what we can do is we can keep these inside the floor layer, but stop them from rendering and we do that be selecting them both and giving them both a compositing tag.

So we go to tag CINEMA 4D tags compositing and a compositing tag gives you options for how layers or elements or objects are composited with each other. So let's apply it and then I'll talk to you a little bit about compositing tags. Okay, this is how a compositing tag appears. It appears here next to each of the layers and if I double click one of them basically the tag gives you options for switching off things like shadows, deciding whether backgrounds are composited, whether it's seen by transparency, refraction, reflection, ambient occlusion, so really, really useful.

So, for example, you might have a scene where the things in the background aren't that important and you can switch off it being seen by ambient occlusion for example so that it speeds up rendering and global illumination as well because you might only want global illumination and an ambient occlusion on things that are prominent in the foreground that are going to be really noticed. But what we're using it for here is for switching it off so it's not seen by the camera. So I want this to be there, but I don't want it to be seen by the camera so I'll switch that off and then we'll do the same for this one, switch that off and now if I save it, and we'll jump back to after effects and you should see the floor with the shadows casting onto them.

Something like multiply might be better there, but obviously this is quite dark so we can't see the shadows very well. So what we're going to do is we're going to make the surface slightly different. We're going to get a reflective surface so that we can see the reflections and the shadows without seeing these edges of the layer. So that's how you can get shadows casting from one layer onto another using individual layers and CINEWARE.