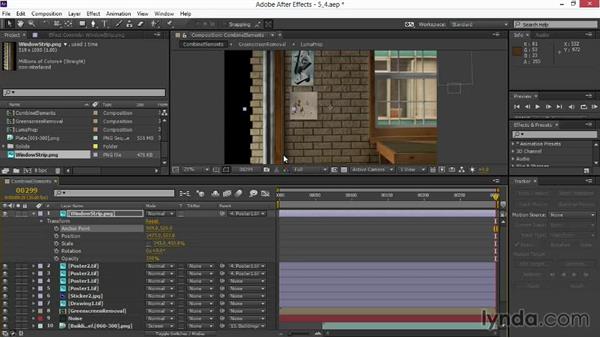 We've added additional set dressing in the form of these two posters on the left. This leads to one problem that we have to deal with, and that's the fact that there's no set here. There's just a big, empty black hole. Be great to have another window there, so you could perhaps see the city behind this building. I do that in several steps. I start by adding a matte painting that represents the very end of the wall. Let's bring in some artwork and take a look at that to see what that might look like. So back to the Project panel > Import > File. This time, we'll go to the Art folder, and in that folder, there's a file called Windows Strip.

We'll import that. Let's take a look. This is actually a narrow matte painting, that was created using parts of the original video. So there is the edge of the brick wall, where the building ends, and also window frame. Let's bring that in. We'll drop that on top, of the composition layer stack, and there it is. Now, of course, it has to be motion tracked, but we do have motion tracking data that we used for the posters. And they're really close to the edge of the wall. So to save time, I can simply parent the window strip to poster one, the top version.

And now it picks up the motion. It's in the wrong place and it's not quite the right size, so let's work with that. As soon as I parent it the transforms change. Right now the scales at 400%, the bricks are a bit small so I'm going to sneak this up even further to 430% and also adjust the anchor point. Now before I do that I should consider the width of this map painting. I actually think it's too wide, I can make it skinnier in one direction by un-linking the scale. I'll click that button right there. And then I'm free to reduce the X by its self.

SOolet's say I want to make the X 343, skinnier so it doesn't take up so much room. Than I'll adjust the anchor point over to the edge of that wall, you can also slide it up and down. So here, values of 909, work well. For X, and also 526 for Y. The semi transfer and chatter right here, that is actually part of the original map painting, and that lays over the top, quite nicely. Let's zoom in, it seems like the map painting is a bit sharp compared to the original video, so I'm going to apply a soft blur here.

Effect> Blur and sharpen> Fast blur. Just one. It's a bit of softening. So that finishes up the side of the wall and the window. But again there's nothing behind that. I do have one more render we can bring in for that though. Back to the Project panel. I'll go ahead and drop the window strip. Inside the Art folder just to save room there we go into the art folder, collapse those, then I will import that new render.

So it will be under exercise files renders, and this is building c. To image sequence to make sure that the sequence button is checked. Select the first one and bring that in. I can drop this into the 3-D renders folder. Let's take a look at that new render. Once again, this is creating Maya simply a photo map to a plane. Now this time, there's actually some motion. Just a very slight move left to right. Motion was approximated based on the original video footage, so this time there's no reason to motion track.

We can drop it straight into the scene. So I'll go back to the composition, grab building c, and drop it at the bottom. Right about plate and there you see the building. It does leave blurred the building to the right and probably should blur this building even further. So on building c selected I'll go back to Effect>Blur and Sharpen and this time Camera Lens Blur so the blur's more realistic. Here it goes, and in fact, it fault value and a 5 for blur radius, works well in this situation. Let's play this back.

And there we have the end of the building. We're able to bring in the matte painting and motion track that indirectly by using the parent menu, and that completed a part of the set that was missing. That, in combination with a 3D render, filled in the hole completely.