Building the environment in HDR with Lightroom 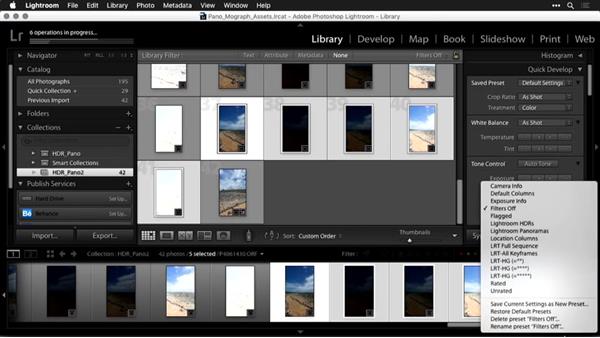 - Now that you've seen the 360 Hues and After Effects, let's revisit the Merge process once more. I'm going to walk you through the Photoshop and Lightroom process but at an accelerated pace so you can see that whole developing section once more. This is just going to serve as a refresher. This time, though, we're going to pick a different image. So I'm going to quickly process this, not in real time, but rather, more of a walk through to give you an idea of what's happening. Let's bring some new images into Lightroom. From the Library modlule I'll choose Import.

And let's navigate to those downloadable lesson files and I'll choose my Pano_MoGraph and twirl that down. I'm going to work with folder five here, and if I open that, you'll see there's a folder called Environment. With that selected, I'll choose Import. There we go. And this is not a 360 pano, but does contain an HDR. You'll notice that we use one, two, three, four, five brackets to showcase the exposure.

Alright, let's go back to that Library module and quickly do a merge. With the first five images selected, I'll choose Photo, Photo Merge, HDR. I'm going to leave Auto Align and Auto Tone selected but Deghost None, and explore that first option, just make sure that it works correctly. If satisfied, I can click Merge and then reuse those settings on the next images. Looks pretty good. I'll choose Merge to make the file.

Now with this Previous Import selected, let's choose All, and make sure to add this to a new Collection. So here we are, I'm going to make a second pano here, Create Collection, and we'll call this HDR_Pano2 and choose to include the selected photos. There we go, and they're added. Alright, that part worked well.

This is that DNG for merged, and I'm going to hide that temporarily. So let's just select the remaining images here, select just it, and scroll down to the end, and place it. And now we can merge the rest. Select the next five images, hold down the shift key, and choose to create the HDR. I could select that, "shift + ctrl + h" merges the next set.

Now, to make it a bit simpler, I could apply a filter down here. For example, I could say only show me images that are merged. Let's say Lightroom HDR. And you see that that merges it down so only the newly created HDR files are left. That's a great way to filter the results of a collection. I'll now select all of these and choose to merge the panoramic. Photo Merge, Panorama.

This should go a bit faster than our previous time through Lightroom because there's fewer source images. Let's choose to Auto Select that method and see which ones it chooses. Spherical's not bad, Cylindrical produces a different result. Perspective doesn't work here cause it's a bit too much of an option. You see I shot a 180 degree panorama. This path you see here was a straight line. So what looks to be a curve should become straight.

So let's go back to Cylindrical. That looks pretty good. There's Spherical. That actually looks a bit better with a straighter horizon. I'll choose Auto Crop to clean that up a bit, and Merge to create the file. Let's let that finish out the panorama and then we can export it for After Effects. The panorama's just about done and instead of viewing HDRs, let's view Lightroom Panoramas.

There's the panoramic file. Double-clidk to load it, and you get all that ability to manipulate the file. Let's go to the Develop module here. And recover the Highlights a little bit. Looks pretty good on the sky there, really brought out the detail in the clouds, lift the Shadows, and pop the Clarity for a nice dramatic skyline. Bring out the Vibrance for a rich scene.

That feels pretty good. I'm going to play with the White point there for the clouds, just to get adequate detail. And I really like the overall look. Remember, the Targeted Image Tool can be quite useful if you'd like to go after certain sections, such as darkening the sky a bit, or manipulating the ground here. Let's darken that, increase the Saturation slightly, and roll the Hue to dial in the color of the dirt that we're looking for.

Little bit redder. Alright. That feels pretty good. I'm going to export this two ways. First up, I'll choose File, Export, and we're going to save this out as a TIFF. Let's use the Lightroom Preset here, and we'll start by exporting as a DNG. We'll target our Hard Drive here, we're going to go as a DNG, and I'll click Export, and save this into my folder here. Pano_MoGraph, Creating a Virtual Environment, and I'll go to the Merged folder and save that out as a DNG.

That's exporting the file. There it is. Let's do that again. File, Export, and this time we're going to save this off custom. I'll go to the Hard Drive, I'll choose a specific folder here, there it is. Let's just go up a level and choose Merged and choose it, and explore the file path, looks good.

I've got TIFF file selected, AdobeRGB as the Color Space and 16 Bit, and click Export to write the file. There it is, it put it in the folder, and we're ready to move onto After Effects.

Video: Building the environment in HDR with Lightroom