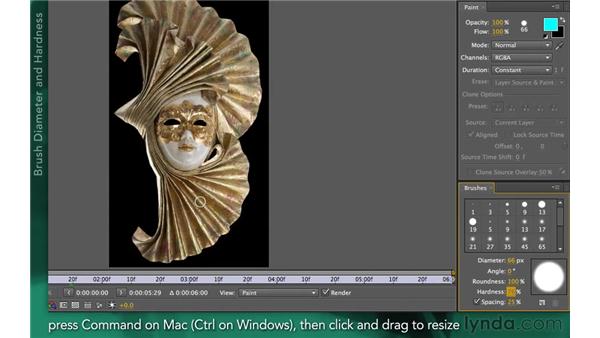 Join Chris Meyer for an in-depth discussion in this video Brush tool basics, part of After Effects Apprentice: 13 Paint Roto and Puppet.

In the previous movie, we set our workspace to Paint.…This opens the Layer panel and the Composition panel side by side.…Remember that to paint, you need to have the Layer panel open and to use the…painting tools in the Layer panel only.…Well, I created one paint stroke which applied, if you notice in the…Timeline, the Paint effect.…If you have been playing around, let's just start over and delete the effect.…I'll select Remove All from the Effect menu and now we can get back to a clean slate.…

The first thing I'll do is reselect the Brush tool.…In the Paint panel, I am going to check that the blending mode is set to Normal,…and you have all the other blending modes available.…And we'll explore some of the other options later on.…I'll also check that the Channels is set to RGBA.…This means that I'll be painting in all four channels, Red, Green, Blue and Alpha.…I'll check that Duration is set to Constant.…This means that any paint stroke I make will exist for the duration of the comp,…starting at the current time.…