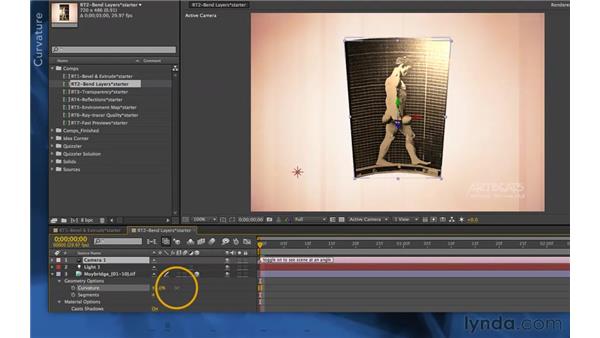 Join Chris Meyer for an in-depth discussion in this video Bending layers in CS6, part of After Effects Apprentice: 11 3D Space.

To recap, with the ray-traced 3D Renderer introduced in After Effect CS6, you can bevel and extrude only type layers and shape layers. As of After Effect CS6, at least, you cannot bevel and extrude movies, still images, photographs, basically pixel-based layers. However, you can bend them. I'm going to open comp RT2-Bend Layer*starter, I've already chosen the ray-traced 3D rendering engine for this composition, I have a layer in 3D with a light, and I've done a little bit of tweaking to this layer to go ahead and reflect this light in a more obvious manner.

I'm going to type AA to reveal it's material options and it's geometry options, we'll be getting those in a moment. And for this particular layer I increased the specular intensity to increase the strength of that highlight, increased the Specular Shininess, so it wouldn't be quite as broad, a little bit more focused, and I have increased the Metal parameter. What the Metal parameter sets is whether or not the specular highlight is based on the color of the layer, which in this case is black and white, not very interesting, or the color of the light, which in this composition is yellow.

And therefore it would create a much more interesting specular highlight than just a color of the underlying layer. So, predominantly black layers is the one case where I do tend to decrease the metal parameter from its default of 100%, this allows me to get a mixture of the light's color mixed into the specular highlight. Underneath Geometry Options you'll see we don't have extrusion or beveling, but we do have curvatures and segments. Now in this flat layer, as you move a light around, you get some interaction between the lights and the layer, but it's not all that focused or all that dramatic. I'll undo.

As you increase the Curvature,however the layer will now bend backward away from the original front surface of the layer, or forward, bulging out from the original front surface of the layer. And once you do that, you have some more interesting light play going on between the layer and the light. Now it's playing through a very central band along the curvature of that layer. If I go ahead bow it outward, as you come around you really play around with where the light is on the layer.

It's a much more focused streak rather than just a big oval, which is what it was with a flat layer. To see more clearly what's going on, go ahead and take the camera layer in this composition and enable it. I've set the camera just to be slightly above the layer so we can see dimension a bit better. Now as I increase curvature, you can really see how the layer bends back in space, or bends forward. You can also see how crude this bending is. The default is just four segments. Unless you want a folded look like this, maybe even going down to two segments, which creates a V fold, you'll quite often find yourself wanting to increase the number of segments until you get it nicely rounded out, like around there.

Now this looks much more like a cylinder than a folded piece of metal. Speaking of cylinders, the bending takes place from the plain where the anchor point is, and it's deflected further back or further forward. As you rotate this layer, Y Rotation runs vertically through the layer, you'll see it's basically rotating around a central axis of that anchor point.

Once you know this, you can start coming up with some other interesting ideas for animations. For example, I'm going to go down into the Idea Corner folder that came with the exercise files and open up RT2-Bend & Spin Layers move. You'll see a little animation we have here of a pair of these layers rotating as a cylinder in 3D Space. The composition in the Idea Corner RT2- Bend & Spin Layers, shows you how this was built. Two layers, one curved -100% forward, one curved +100% back in space, parented to a central null that is right in the middle of those two layers, so that all we need to do was animate the rotation of the null rather than animate each layer independently.

And by the way, parenting was covered in earlier lesson. And delete that keyframe I just created. If you want to see some other ideas, inside Comps_Finished, there's RT2-Bend Layers_final, where I tackle the question, what happens if you want to bend on a different axis? When I was working back on this composition, it was just bending around the Y axis, kind of making a soup can, but I wanted to create something that looked more like a sail, where it's bending around the X-axis. Well to do that, I had to position the layer in a precomp. I rotated the layer to place it on its side, then one level up in my final comp, I could go ahead and use the curvature parameter to bend the layer around the X-axis of the original object.

Finally, I rotated it again another 90 degrees to put it back upright again. So I bent the layer, in that orientation along the Y-axis, and then put it straight again.