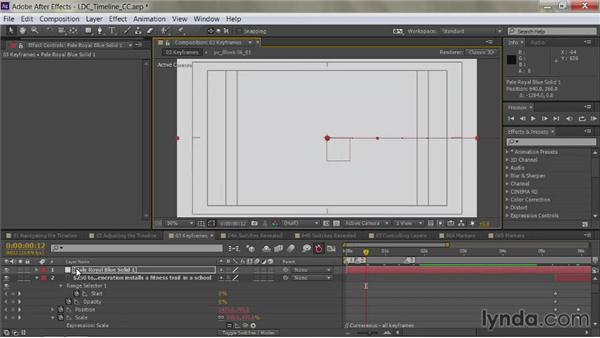 Join Richard Harrington for an in-depth discussion in this video Autokeyframing, part of After Effects Guru: Mastering the Timeline (2013).

One last thing with keyframing. And that is the ability to auto-keyframe. I'd like to caution you about overusing auto-keyframe. Essentially what it does is a behavior very familiar to many users of Apple Motion. If you enable it, any property you change becomes a keyframe. Remember, the default in After Effects is to allow you to modify properties without adding keyframes. But, if you enable auto keyframing, that behavior is a little bit switched up. For example, let's add a new layer here just to illustrate this property. And I'm going to insert that layer I'll make a solid, and what I want to do is create a transition. Here we go.

Moving towards the start of the composition here, I'll turn on auto keyframe. Now, by dragging and moving that layer, I'll just hold the shift key to constrain it. I've moved it off. Moving forward, to 12 frames, I can drag it back in. And you'll see what it did is it recorded that, as an animation.

Now let's switch that up a little bit. Instead of animating on, I want it to animate off. So I'll just lasso around those two keyframes, choose Animation >KeyFrame Assistant >Time Reverse and they switch. Let's press Play. And you see we've now created our wipe on, that works out quite well. Let's move on the end of the composition and I want to create a wipe there as well.

If I just grab and wiggle that, you'll see that it added a key frame automatically. I'll move forward and drag it across. Here we go, and there's the second animation. So when used correctly the use of auto keyframing can be quite helpful as it speeds up. Instead of having to drill down select position, and enable the stop watch. I was just able to use some of the on image controls up here in the composition window.

9/30/2013
In this course, Rich Harrington offers tips for creating a fast and efficient motion graphics workflow in the After Effects timeline—leaving you with more time for creativity. This installment of After Effects Guru reveals time-saving features for navigating to specific timecodes, adjusting keyframes, changing layer behavior and applying effects with switches, and using markers to annotate your projects.

This course was created by Rich Harrington. We are honored to host this content in our library.
Topics include: