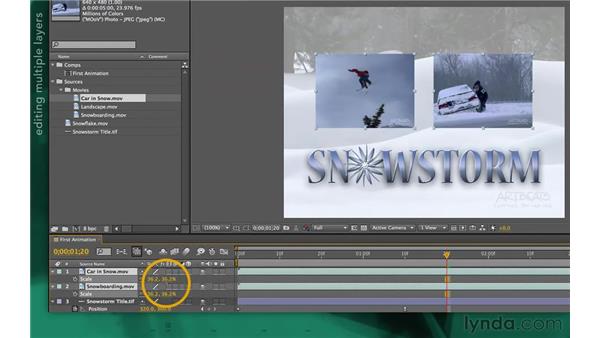 Now, let's add out foreground movies. I'll move the Current Time Indicator until the title has finished its animation. That way I'll know how much space I have to work with. The first movie I'm going to add is the movie of the snowboarder. I'll drop it in the comp, and as I scale it, I'll add the Shift key to maintain the aspect ratio. I'll just roughly position it for now. The second movie will be on the right- hand side and should be the same size as the first movie.

An easy way to do this is to duplicate the layer and then replace the source. To duplicate a layer, select it, and under the Edit menu, select Duplicate. The shortcut is Command+D on Mac Ctrl+D on Windows. Note that After Effects does not offset a duplicated layer, unlike other programs. As I drag this duplicate to the right, I'll add the Shift key to maintain the same value on the Y axis. Now I just need to replace the source with the second movie.

So with the duplicate selected, in the Project panel I'll select a movie I like to use instead. Press the Option key on Mac or Alt key on Windows and just drag and drop it. You'll notice it now has the same position and scale and all the transformations. It would even have the same effects, if effects have been applied to it. At this point, I think I'd like more space between the movies. I'll select both layers, press S to reveal Scale. I can scrub these values, and both layers will scale at the same time.

I can also press the Command key on Mac, Ctrl key on Windows, and scale in finer increments. If I want a precise value, I can type it in. Let's say 40%. When I press Return, both layers will have the same size. Now if you like to use shortcuts and you have an extended keyboard, there are some handy shortcuts you might like to learn. For instance, the Plus key will rotate a layer in one-degree increments while the Minus key rotates it counterclockwise. If I add the Option key, I can scale in 1%-increments with plus and minus.

Add the Shift key to scale 10% at a time. To adjust position in smaller increments, I like to use the Up and Down Arrow keys. However, if I press P for position, I can scrub the value just for Y. Be careful though, by typing in a precise value. For instance, if I type in 190 for the Y value, it'll copy both the X and Y value to the second layer. I think I better undo now. So continue tweaking the layers until you got them in exactly the position you'd like.

Maybe a little more space between the layers would be nice, because I'll be adding a drop shadow in a little while. At the end of this lesson, I'll also offer some tips for how to arrange layers precisely, using grids, guides, and the Align palette. I think I'm happy with this placement. In the next movie, I'll add the red solid at the top of the comp.