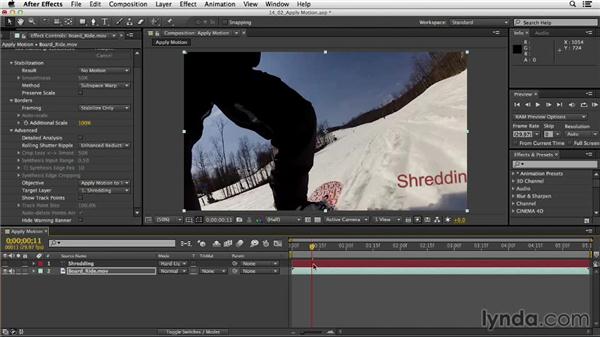 One of the most fun features of Warp Stabilizer VFX is its ability to analyze the motion of an entire shot. And then, apply that motion to another layer inside your composition. Let's look at the project we have loaded up right now. Press 0 on your keyboard to load up a RAM preview. I'm going to press the space bar to stop playback. Now, I like the sound of the board shredding across the snow, but I think the word shredding itself is falling a little flat. Let's apply Warp Stabilizer and see if we can't fix that issue. Select Layer 2, this will be the layer we take the motion from. Now with Layer 2 selected, go up under the Animation menu and go down and use Stabilizer VFX.

Now that we've loaded that effect, you'll notice that is analyzing the footage in the background. If you had any other compositions or other work to work on, you could definitely continue working inside of After Effects while this process is happening. Now when looking at that shot, I know that the camera was travelling along with a snowboarder. So, I want to make sure to change the result for this stabilization from smooth motion to no motion. And even though the clip is still being analyzed, I can make these changes. Because these changes won't affect the analysis. They only affect the stabilization process of the clip. Now once the stabilize has been processed, you'll notice the image looks kind of funny.

Load up a RAM preview, and look at what happened to the clip. Let's go ahead and stop playback. Immediately, I already like this result. Now the fact that the words kind of slider off the edge of the page is not necessarily a good thing. So, there's some settings that we need to adjust. With Layer 2 selected, go down to the next option where it says Show Track Point in the Effects control panel.

When we show the track points, we'll get all these tiny points. Now, if you want to more clearly see the points, go ahead and click and drag on the track point size to increase their size. Also, make sure that Auto-Delete Points is selected. This means once I delete some of these points, if we move down the timeline, those points won't reappear. I'll delete them all the way across the length of the timeline. Now we're not on frame zero, so let's just start at the beginning. Now from the beginning, I'll just click and drag to draw a huge lasso around all of these different points that we don't want to use.

Now, I'm deleting all the other points around the outside of our snowboard. Because I'd like to actually use the movement of the snowboard to determine the movement of the graphic. Now as you delete the track points, you'll notice After Effects is re-processing the scene. As you move a couple frames down, there will be more track points that get applied. And that's just because the warp stabilizer is picking up new pixels, it can lock on as you continue moving down the shot. Let's just keep deleting some of these points. Now just so this isn't completely tedious, I'm not going to keep the leading the points moving down the composition.

You know how the process works, what I am going to do is turn off the show track points option. Now you should see the word shredding, sitting significantly higher in the same. And its motion is going to more closely mimic the movements of the snowboard. Now, I encourage you to move down the timeline and continue deleting the extra trackpoints. The more trackpoints you delete, the more specific you're going to be about telling the text exactly what motion you'd like to translate from your source video.