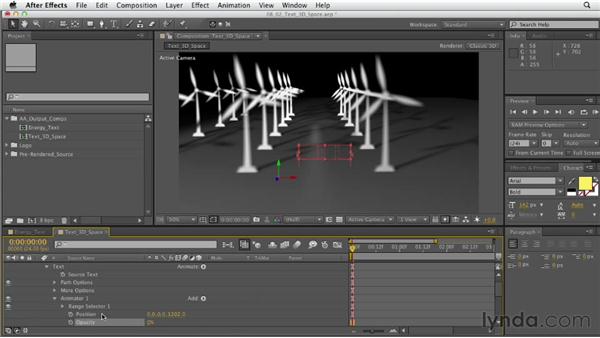 Animating text in 3D space is really no different than animating text in 2D space. You just have to be a little more methodical with keeping track of exactly where you are. For this animation, we're going to create a text animation, where the word wind will zoom out towards the camera and then disappear back away from the camera, and of course, it will zoom out in 3D space. Now just so you know, in the previous video, we animated this Text layer at five seconds and so this animation is going to be five seconds as well.

We are eventually going to add all of these text animations together to create one big animation. So now that we understand that, let's press Home to move our current-time indicator to the start of the project and press Command+T or Ctrl+T on the PC to grab the Text tool. Now hover your mouse over the canvas and click. With our cursor set in the canvas, let's type W-I-N-D in all caps and grab the Selection tool to set our text. Now since I want this to shoot out towards the camera, I'm going to actually make the text a little bit larger by clicking and dragging in the Paragraph panel.

If you don't see the Paragraph panel, quickly grab your Text tool and just toggle this button on and off. Okay, back to our Selection tool. Let's move wind down into the center of our comp and enable 3D on the layer. Now if you press P on your keyboard, notice if you scrub on the Z parameter, wind is moving together as one big word. Well that's kind of in 3D space but not exactly. So let's Command+Z or Ctrl+Z to undo and open up the Properties for WIND, and the open up the Text Properties.

There is nothing in here like a check box to enable 3D. It's actually under the Animate menu. So click on the Animate button and there we go, Enable Per-character 3D. So when we select that, now you notice I have slight, small bounding boxes around each of the individual letters. And also look at the 3D switch; it has two boxes letting me know that not only is the layer in 3D space but each individual character. The way I like to work with animating things in 3D space is to set everything up in its starting position with the selector having selected absolutely everything.

So to show you what I mean, let's add the parameters we're going to animate. So let's go back to the Animate button and click, and we'll start by animating position. And if you just click and drag on the Z position, drag to the right to move the wind back in the comp. Let's drag it to around 1200. Okay, that's look good. And now I want the letters to fade in as well. So if we go to Add, we can go to the Property and add Opacity. Notice I didn't have to go back up to Animate since the animator already has this nice Add button.

So let's go to Property and choose Opacity. Now with Opacity set up, since I want this to start at 0% Opacity, let's click and drag the parameter to set it to 0. Now let's open the Range Selector. As you can see, it selected everything because its start is at 0 and its end as 100%. Most of the time when I animate type, I like to just animate the offset, so let's see what happens if we scrub the offset, because this is how we want our text to start.

If we scrub it to the right, when it gets to 100% you can see everything and it's exactly at the front of the scene the way we want, but notice it stops. In this animation, I want this to pop-out towards us and then go back away from the camera. I don't want to go back this way because I'm having the letters go back backwards, I want it to literally just kind of strobe through all the letters pop-in and then they all pop-out. So to do that, we need to actually go to the Advanced Tab and change the mode from Add to Subtract.

This way when we adjust the Offset all the way back to 0, notice nothing is selected and as we scrub through when it hits 0, the word is going to be all up, and now as we continue on to 100% through the Offset, it's back to its starting point. So to reiterate, let's scroll down and look at the mode again. See, when I set it up to Add, this is how we had it set up originally. As we animate the Offset, if I drag it back to the beginning, notice it's starting where I want the middle to be and halfway through that's where I want the end and the beginning to be.

So it makes sense to go down to the mode and change it to Subtract because that would give me the inverse of the animation we just created. To literally create the animation, we now need to finally add our keyframes. So let's scroll back up to the Offset parameter and click and drag all the way to the left and create your first keyframe. Now move the current-time indicator two seconds down the timeline and scrub the Offset all the way through to 100%.

This way, you can see when you press 0 to load up a RAM Preview, it's going to start away and faded out and then back in. Just to give this a little bit more flavor, I want to adjust the rotation because this coming out looks very similar to a scale to me. So if we collapse the Text layer and just press R to open the Orientation or the Rotation, we can just set the Rotation for the layer itself. Now in order to see what we're doing in terms of how things are moving through the scene, let's move the current-time indicator to the middle of our animation.

That way when we adjust the Y rotation here, you get a more clear picture as to how far the letters are travelling from their source and their end positions. Let's add a little bit of the X rotation here because I want it to sort of popup and Z rotation just to kind of give it a little flavor. All right, so there we have wind pop-out and then fade back away. So as you can see, animating text in 3D space is remarkably similar to animating text in 2D space.

You just get the added benefit of the third dimension.