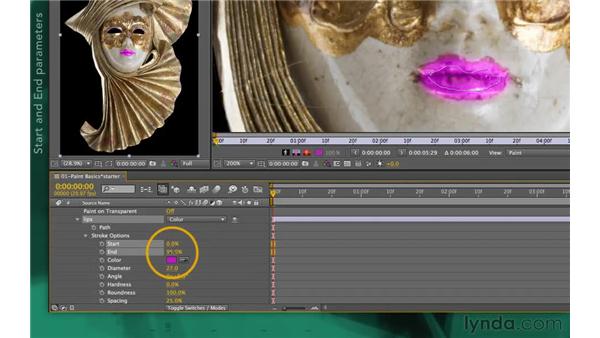 Join Chris Meyer for an in-depth discussion in this video Animating strokes, part of After Effects Apprentice: 13 Paint Roto and Puppet.

In this movie, we'll add some color to the lips and I'll show you how to…animate on a stroke.…To get setup, I'll make sure I have the Brush tool selected, and that I have a…color that I'm going to use.…Feel free to use any foreground color you like, and I think a size of about 27…that I have here is looking about right.…I'll leave my Blending mode set to Color, for the Channels pop-up, it doesn't…matter whether you set it to RGB, or RGB plus Alpha, since we're only painting…inside the original image.…

I'll press Home so that my stroke starts at the beginning of the comp, I'll be…sure to press F2 to deselect any other strokes that might be selected.…Now in one continuous stroke, I'll paint around the lips, returning back to the beginning.…As soon as I'm finished painting I can press the V key to return to the…Selection tool, that way I can be sure I'm not going to add any extra strokes by…accident or replace an existing stroke.…Now I have three strokes, and if you want to keep track of which one is which,…