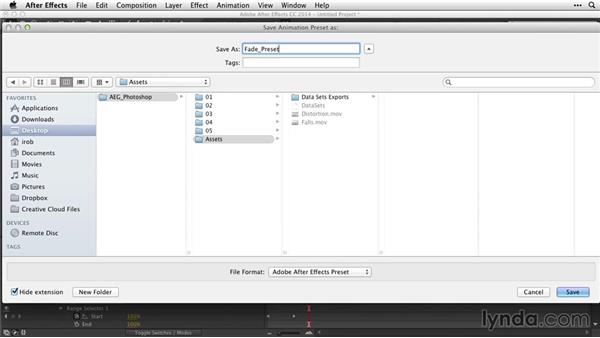 Join Ian Robinson for an in-depth discussion in this video Animating lower thirds with data sets, part of After Effects Guru: Working with Photoshop Files.

…What I'm about to show you is literally one of my favorite things about working in…After Effects.…And that's a modular workflow.…Whenever I create an animation, the one thing that drives me up the wall is when I…have to recreate the exact same thing.…So rather than doing that, we'll create one animation and then swap out elements.…That way, we can work in a streamline fashion and efficiently.…So let's get started.…So let's start with a blank After Effects composition.…Double-click in the project panel.…And I want to import those dataset files that we had…already exported in the previous video.…

So navigate in your exercise files to the Assets folder.…And then under Data Sets Exports choose all three psds.…I'm going to click on one, hold down shift and click on all of them.…Under Import As, make sure it's set up as a composition retaining layer sizes.…You don't want Multiple Sequences selected, and then click open.…Once they're imported, since they're all selected, you can easily click on one and…drag it down to the folder icon and rename that folder 01_Output_Comps.…