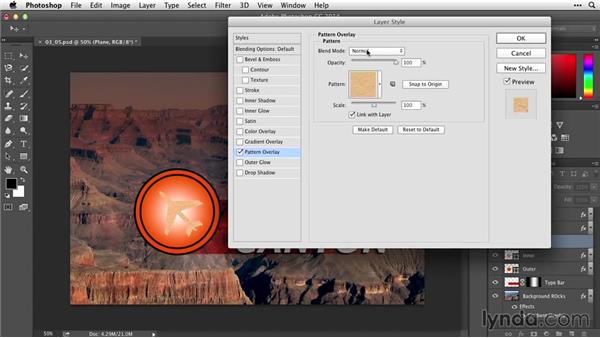 Join Ian Robinson for an in-depth discussion in this video Animating with layer styles, part of After Effects Guru: Working with Photoshop Files.

…Now I know I'm showing my age when I admit this but…I clearly remember when layer styles were first introduced in Photoshop.…And it was followed by a bevy of designers using bevel and…dropshadow until their heart's content.…It was a little bit sickening.…But it was kind of fun to be able to actually apply a bevel without having…to go through 55 different steps first.…Now, all of these different effects are well and…good, when it comes to actually creating still elements.…But when you want to actually animate with these effects, there are some hurdles you…need to be aware of, and that's what we're going to go ahead and explore right now.…

So, I'm going to start in Photoshop.…Make sure you have the 0-3-0-5 psd open.…And I want to start with this inner circle.…Now when I select this vector object, you're not going to see any of…its options up here until we actually go grab a vector tool.…Once we do that, you can see I've got my Fill and my Stroke.…Now we've already established that stroke from vector objects will not…